General Grant is progressing in some style for a horse twelve months away from reaching his full potential.

The leggy son of All American wasn’t seen until he won a Bunbury 3yo maiden on debut in February.  Given ample time by trainer Stephen Miller, he resumed this season and has looked a promising stayer winning two in a row at Belmont.

General Grant (4g All American – Soldier’s Smile by Soldier’s Tale) doubled up last Saturday after getting the better of Stafford’s Lad (Demerit) in a head-bobbing finish to the TABtouch Westspeed Hcp (1600m).

“He’s raw and still doesn’t quite know what he’s doing,” Miller said.  “He was coming out of a Class 1 win and dropping a couple of kilos helped.  And it was a top ride by ‘Shooter’ (McGruddy) to sit in the box-seat.”

General Grant was purchased as foal by Jade Fletcher acting for Horseshoe Investments owner Rod Russell who knows what it takes to make a stayer.  His Group 1 gallopers include 1995 Melbourne Cup winner Doriemus.

Future plans for General Grant aren’t that grandiose but Russell would love to win the Broome Cup with him in 2022.  “He will be peaking by then,” Miller predicted.  “He just got there today but the horse he beat was coming out of a placing in this year’s Broome Cup.”

McGruddy was also impressed after taking over from Brad Parnham.  “He was off the bridle with that genuine pace and then felt lost after taking the lead.  But when the other one joined in, he kicked again and got the job done.

“S.J. is never in a hurry to drive them out.  This horse is a work in progress and will keep learning as he goes along.”

All American’s latest foals are arriving around the State and his home base at Geisel Park has just welcomed a filly from Ascot winner Miss Safari (Ferocity).  Her G2 Karrakatta Plate-winning half-sister No Questions (Xaar) is the dam of All American’s recent Belmont winner Double Rush. 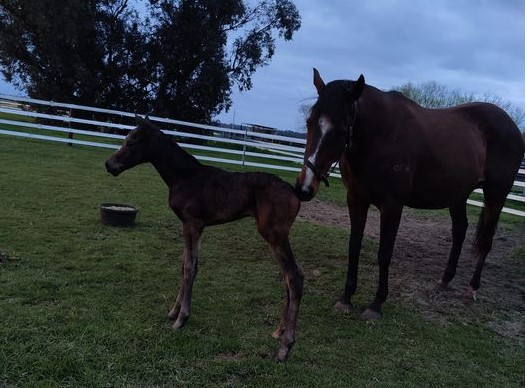 Miss Safari with her filly by All American