Jeanella is bred to be a winner and she showed a will-to-win on par with her pedigree at Belmont on Wednesday.

The 2yo filly by Scenic Lodge sire Universal Ruler was racing on debut and was always travelling like a winner for trainer Adam Durrant and his mother Vicki.  She settled in the box-seat for Clint Johnston-Porter and let down with a determined finish to run down Bisector (Demerit) in the Amelia Park Maiden (1000m).

Jeanella is a half-sister to five winners including Mr Genoa (Blackfriars) who won 7 races in WA and Victoria including the 2019 Country Championship Final at Ascot.  “It was no surprise to see her do such a good job first-up,” stable foreman Jason Miller conceded.  “Clint rode her well, too.

“She comes from a good family and has a bright future.  They’ve all shown ability although this one is much better behaved.”

Their NZ-bred dam Jean (Volksraad) was a 2yo winner at Awapuni and went on to win another four races in Perth at Belmont (3) and Ascot.  Her most recent cover was to Dash For Cash last October.

“She’s a professional,” Johnston-Porter reported.  “She’s one of the quietest 2yo winners I’ve ridden and felt like a winner in running.”

Universal Ruler (Scenic) also sired Rulelee to win first-up for trainer Sue Olive at Belmont last Saturday.  The 4yo mare had won two in a row at Ascot and Belmont earlier this year for Vaughn Sigley and owner-breeders Glen & Jan Kettlewell.

Universal Ruler maintained an outstanding yearling sale return at the Perth Magic Millions in February with an average of $81,200.  That was a 12.3 multiplication off his service fee in 2019. 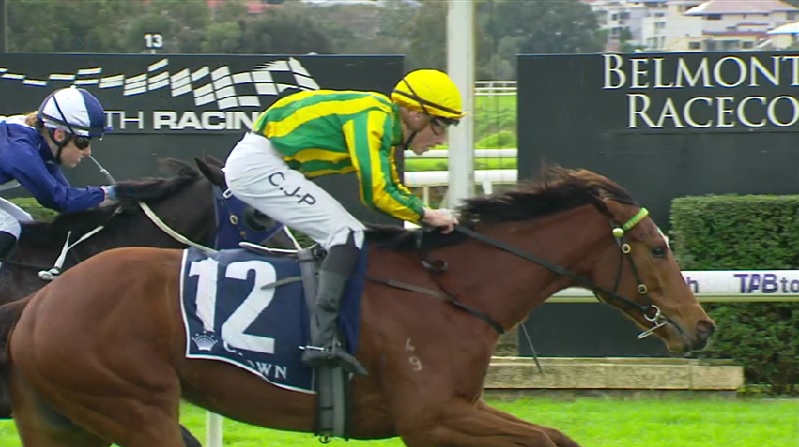