More Than Ready (USA) 2yo Slipstream stole the show with a last-to-first victory in the Belmont Futurity (Gr.3, 1200m) in New York on Sunday.

It earned the Christophe Clement-trained colt an automatic entry into the Breeders’ Cup Championships at Del Mar on November 5 and came just 24hrs after More Than Ready filly Bubble Rock won the Matron Stakes Gr.3 over the same turf track and trip.

Slipstream is the 212th individual Stakes winner by More Than Ready and is his fourth 2yo Stakes winner in the last 28 days!  It started with Koala Princess (209) who remained unbeaten in the $500,000 Ainsworth Stakes (LR, 1300m) at Kentucky Downs on September 12.

Consumer Spending (210) maintained the momentum when rocketing home in the Selima Stakes (LR, 1700m) at Laurel Park on October 2 before Bubble Rock (211) landed the first-leg of a Group 3 double at Belmont on the weekend.

It’s an unprecedented rush of black-type, even for the Vinery legend, and it has also catapulted him into third place on the 2021 North American 2YO Sires premiership with earnings of $1,297,446.

Slipstream had won a Belmont nursery by five lengths last month but wasn’t expected to bring Chi Town Lady undone in the Futurity.  The unbeaten daughter of More Than Ready sire Verrazano was an even-money, morning-line favourite, however, she didn’t figure as the eventual winner charged through the pack to claim front-runner Run Curtis Run.

He races for Jump Sucker Stable after a winning bid of $170,000 at the 2020 Keeneland September Yearling Sale.  “I think he will be suited in the Breeders’ Cup Juvenile Turf (Gr.1, 1600m),” Clement said.  “I always like when you go to California and push that sprinter speed out to a mile.

“I expected him to be closer to the pace today but I loved the way he finished.”

Winning jockey Joel Rosario said he had to adjust after Slipstream was bumped at the break by Biz Biz Buzz and Kavod.  “It just looked a little tight right away and I had to find a different style with how the race was playing out.  The plan was to be a little closer but it worked out okay.”

More Than Ready’s current 2yo crop in Australia, the penultimate conceived at Vinery, is getting mobile and the Kelly Schweida-trained filly Module looked an early type winning a Deagon trial over 650m last Tuesday.  She cost $425,000 from Vinery (as agent) at the 2021 Gold Coast Magic Millions.

Module has been nominated to debut in the QTIS 2YO Hcp (1000m) at Eagle Farm this Saturday.  She was bred by Steve McCann (Encompass Bloodstock) and is a half-sister to Schweida’s Dalrello Stakes (LR, 1000m) winner Miss Hipstar (Star Turn). 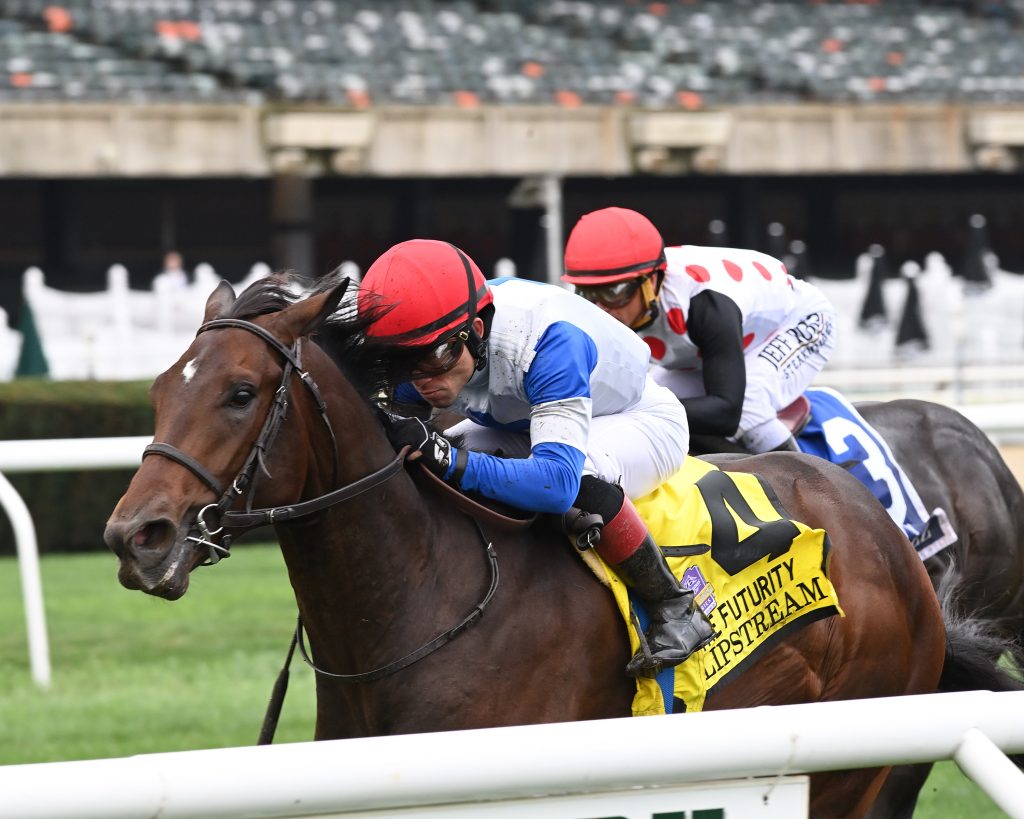