Snippets Land added his name to the list of Raheen Stud’s black-type graduates in the LR National Sprint (1400m) in Canberra on Sunday.

Raheen has been on the winning end of several updates leading into the QTIS Yearling Sale next Monday & Tuesday (March 16-17).

Snippets Land (Snippetson) has returned a cheque in every one of his 11 starts for $155,000 in prizemoney.  He charged home from the back of the field to score by a length for owner Ross Visalli in Canberra.

“He did a good job with 58kg on his back,” trainer Peter Snowden said.  “Hugh (Bowman) rode him perfectly and now we have a couple of options leading into the autumn carnival.”

Raheen sold Snippets Land for $120,000 at the 2012 Gold Coast Magic Millions and it has another Snippetson colt (Lot 31) and filly (Lot 307) available at the QTIS Yearling Sale next week.

The colt is from winning Flying Spur mare Soaring Angel and the filly is out of Matilda’s Dance, a Brisbane winner by Danehill Dancer.  “They are both first foals but are typical Snippetsons,” Raheen studmaster Basil Nolan jnr said.  “They are muscular, forward types and should get up and run early.”

Raheen received another city update on Saturday when Sino Eagle was a first-up winner of the Mrs Mac’s Bakery Sprint (1200m) at Flemington.  The Peter Moody trained mare sent her strike-rate to 7 wins in 18 starts and over $300,000 in prizemoney for a Vermont Football Club syndicate.

Sino Eagle (4m Casino Prince Vermont Eagle by Octagonal) was bred by Raheen Stud cost $30,000 at the 2011 Gold Coast Magic Millions.  The straight-six win came twelve months to the day after she was Group 3 placed in the Frances Tressady Stakes.  “We want to build on that with a black type win,” Moody said.  “She’s pretty good and there might be something coming up in Adelaide.”

Raheen has catalogued a Casino Prince – Remembering colt (Lot 384) for the QTIS Sale and he is bred on the same Zabeel cross as Sino Eagle.

Group 1 winning sire Captain Sonador dominates with 18 yearlings among Raheen’s draft of 31 lots for the QTIS Sale.  They are part of his penultimate crop – he died after a paddock accident in February 2014.

Captain Sonador has sired two winners to date from his first crop and there could be more last-minute updates this weekend.  His first winner Capitanear has been nominated for Ipswich on Friday and Gold Coast on Saturday.

Stablemate Big Dollars is another Captain Sonador and he has been placed in all three runs this year.  He has been entered for the same two races and trainer Jason Gregory will decide their destinations later this week.

The Captain Sonador sister to I’m Belucci (Lot 35) will be one of the stars of the QTIS Sale.  “She’s right up there among our best at the Gold Coast.” Nolan stated.  “I’m Belucci was very impressive first-up at Doomben and her younger sister is a lovely, athletic individual.”

The Raheen draft for the QTIS Sale is available for inspection on the Gold Coast sale grounds at Stables D and E. 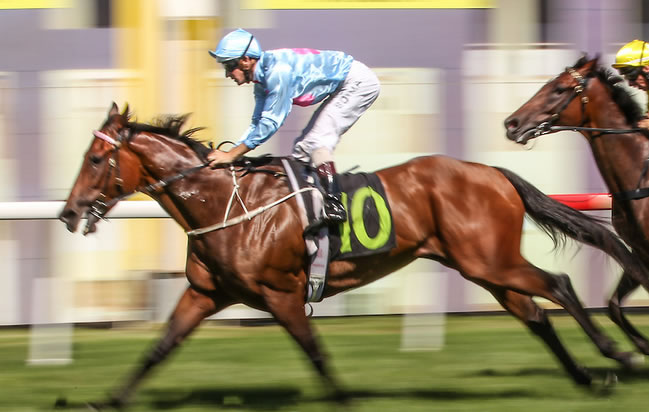