Swear had won on debut for Spendthrift at Hawkesbury in April and he was the medium of heavy support before a first-up, half-length victory over High Mist.

Saturday’s result follows fellow Spendthrift winners Into Orbit, Spirit And Fire and Ameristralia in recent weeks.  The Romsey based nursery and Team Hawkes will set Swear for the G1 Victoria Derby (2500m) at Flemington on October 29.

Co-trainer Michael Hawkes said Swear is a stayer on the up.  “He covers a lot of ground and hopefully there’s a lot more in store once he stretches out.  He just needed time and the owners have been patient.  It’s just a matter of getting them in the groove.

“He wasn’t that comfortable in the ground but his class prevailed.”

Swear is by champion sire Redoute’s Choice from NZ Karaka Million winner Crossyourheart (Show a Heart) and was a $725,000 buy for Spendthrift Australia at the 2015 Inglis Easter yearling sale.

“He feels like a Derby horse and he will definitely stay the trip,” jockey Tommy Berry claimed.  “He’s got a beautiful big action and, to be honest, I was surprised to see him win so well today over 1400 metres.”

Swear will likely take a traditional Sydney path to the Victoria Derby via the Gloaming Stakes and Spring Champion Stakes before travelling to Melbourne.

Spendthrift is making significant inroads following an initial 12-month period establishing its presence in the Australian market.  Owner B Wayne Hughes and his Australian manager Garry Cuddy have several stallion prospects in the pipeline – like Swear – to join Warrior’s Reward (USA), Hampton Court and Jimmy Creed (USA) on the roster at Romsey. 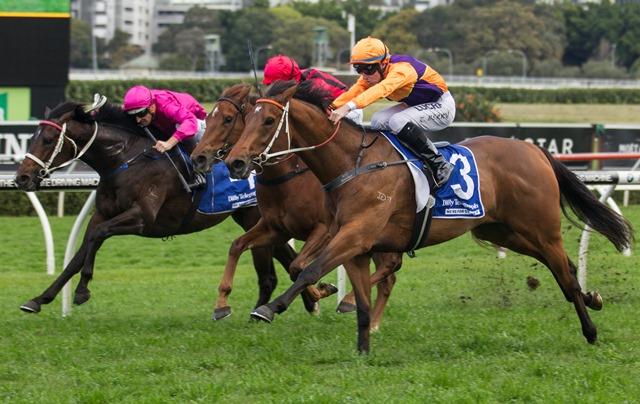