All American has cranked up his strike-rate with 8 winners in 4 days ahead of the 2019 Perth Magic Millions.

His first WA yearlings conceived at Geisel Park will be targeted by local and international buyers following the four-nations blitz in New Zealand, Australia, Hong Kong and Singapore.

All American sired three winners in 24 hours across the Tasman topped by 3yo filly Tiger Silk who will step up to black-type after breaking her maiden third time out at Ruakaka on Friday.

“Tiger Silk has a nice turn of foot and her final sectional (34.04s) was very good ,” trainer Richard Collett reported on Monday. “There’s a stakes race at Ellerslie in a fortnight that will suit.”

The LR Trevor Eagle Memorial (1500m) is her immediate target on December 1. Collett bought her for $85,000 at the 2017 Inglis Classic Sale and she races for a partnership that includes his wife Judy and stable client Joanne Sims.

Tiger Silk is a three-quarter sister to Bachman who was All American’s first Group winner in the 2014 Baillieu Hcp at Rosehill.

Brasada was another very impressive maiden winner for All American during the tri-code meeting at Cranbourne on Saturday night. He still has a bit to learn but raw ability and a strong desire to find the line helped help break through at just his second start for trainers Leon and Troy Corstens.

“He got a little stirred up and by the time he got around to the gates had almost forgot he was there to race,” Troy Corstens said. “Dylan Dunn improved his position after a slow start without much fuss and then headed to the centre of the track where he put in the big strides.

“Dylan was very upbeat about the performance and reaffirmed our opinion that he’s at least a Saturday-class horse.”

Brasada is owned by Shane & Rebecca Morrissy and Dean Harvey of Baystone Farm. His USA dam Ranchy (Siphon) was bred by Overbrook Farm and was a 2yo winner in California. She is out of a half-sister to Overbrook legend Storm Cat.

Elusive State continues to go from strength-to-strength for All American in Hong Kong while completing a hat-trick for trainer Tony Millard on Sunday.

And he has more to give judging by the way he looped and swooped in the Bochk Private Banking Hcp (1650m). Chad Schofield sent him on a long, sustained run to boost his bank-balance to $HK 4.11 million.

Millard declared Elusive State could be something special after his previous win last month.

Silver Joy won his maiden in Singapore just minutes before Elusive State saluted for his latest win at Sha Tin.

“He’s always shown promise and everything went right today,” trainer Bruce Marsh explained. “He got the mile and there’s no reason why he can’t go further.”

Winning jockey Koh Teck Huat complimented Marsh after weighing in. “Bruce has done a good job with this horse. He was travelling quite keen and ran on very well in the straight.”

Silver Joy is a 3yo gelding from Swettenham Stud mare Rainbow Queen (Royal Academy). She is a winning half-sister to Group 2 winners Chase The Rainbow (Dash For Cash) and Ms Funovits (Reset). 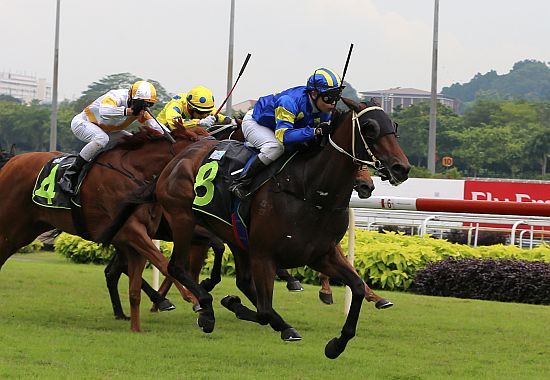