Vinery freshman All Too Hard has passed an early muster with a colt and a filly going postwards for the first juvenile events of the season this weekend.

Gai Waterhouse has entered Mystic Empire for the LR Gimcrack Stakes (1000m) at Randwick on Saturday and the Tony McEvoy-trained Domination fronts up in the LR Maribyrnong Trial Stakes (1000m) at Flemington on Sunday.

All Too Hard scored on debut as a February 2yo at Flemington but didn’t fully furnish until he was a 3yo winning the G1 Caulfield Guineas in the spring and the G1 Orr, Futurity and All-Aged Stakes during a landmark autumn campaign.

It’s reassuring to see his youngsters up and running this early and Waterhouse was all smiles after Mystic Empire finished third – beaten three-quarters of a length under a tight hold – at the Randwick barrier trials on September 19.

“I loved the speed she showed, the way she travelled and got into a rhythm,” Gai said.  “She’s talented and very professional.  Tommy (Berry) didn’t put her under a lot of pressure.  She had a good blow, pulled up well and is only going to improve from the experience, both physically and mentally.”

Mystic Empire has been kept safe at $15 in Gimcrack markets behind stablemate Chain Of Fools – a flyer by fellow Vinery sire More Than Ready – who is the opening favourite at $4.20.

Bookmakers have opened Domination at $13 for his debut in the Maribyrnong Trial Stakes.  He was a $260,000 buy at the Gold Coast Magic Millions and is coming along nicely according to McEvoy’s bloodstock manager Rick Connolly.

“Tony and I were captivated by All Too Hard’s first yearlings.  We loved this bloke and a few more we couldn’t afford.

“He won a jump-out at Flemington earlier this month and Kerrin McEvoy is coming down to ride,” Connolly added.  “He’s a beautiful mover and is really blossoming.”

All Too Hard’s filly from Makybe Diva is also on the books with McEvoy-Mitchell Racing and she has been named Divanation.  “We’re just poking along and won’t be putting her under the pump anytime soon,” Connolly revealed.  “She’s more in the style of the mare – her earlier foals were a lot bigger and longer.”

Divanation was knocked down for $300,000 at the Inglis Melbourne Premier yearling sale in March.  Among her owners are McEvoy-Mitchell partner Pipeliner Bloodstock and Neil Werrett who was also in the syndicate that raced All Too Hard’s older half-sister Black Caviar. 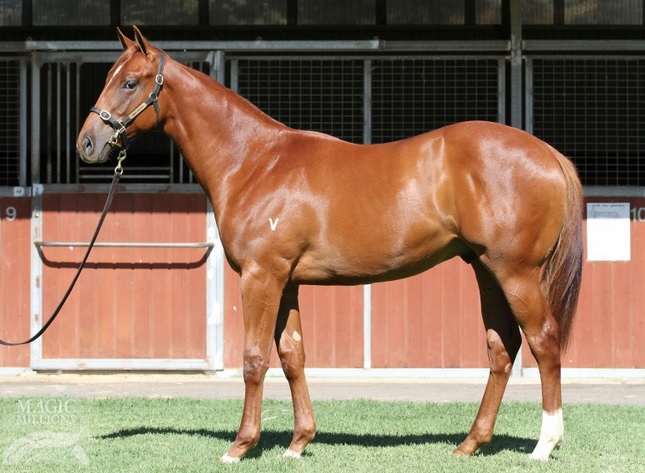