All Too Hard has made a sensational start to the new season and it’s about to go top-shelf with his Group 1 gallopers Alligator Blood and Behemoth.

Alligator Blood returns after a long injury-enforced spell in the Goldmarket Hcp (LR, 1200m) at the Gold Coast on Friday.  He’s opened a $4.20 favourite and bookmakers are quoting the same price for Behemoth in his quest for a second Memsie Stakes (Gr.1, 1400m) at Caulfield on Saturday.

With his first crop just turned six, All Too Hard is now fully equipped to make serious inroads on the Australian sires’ premierships.  And with a pair of genuine Group 1 horses, it can turn into a career-defining season for the Vinery champion.

Alligator Blood is the key.  Ahead of the first Group 1 on the calendar, all eyes will be focused on the Gold Coast tomorrow to watch a comeback that’s been 10 months in the making.  His ratings are through the roof with a Group 1 Australian Guineas in the credit column but he’s been weighted accordingly with 61kg.

Incoming trainer Billy Healey saddles Alligator Blood for the first time and he’s keeping a lid on expectations.  “He’s first-up over 1200m, so just as long as he’s running on well, I’ll be happy,” Healey said on Wednesday.  “He’s thriving and is as free as a bird in his action but it’s a big deal for him to have to get through all of that on Friday.”

Alligator Blood will target Group 1 races if connections can get him on a flight to Melbourne for the Rupert Clarke Stakes (Gr.1, 1400m) at Caulfield on September 18.

Behemoth has already arrived for the Memsie Stakes.  “It’s exciting sending him over there,” trainer David Jolly said from Adelaide.  “Obviously he won the race last year and we think he’s going as good as ever.”

Behemoth secured the Spring Stakes in the stewards room first-up at Morphettville and he went a strong gallop alongside Beau Rossa on Monday.  “Kayla Crowther was incredibly bullish,” Jolly added.  “She genuinely thinks he’s as good as he’s ever been.   Whatever’s in the water down there on the Mornington peninsula, he’s enjoying it.

“If he does what he did last year, I don’t think they would beat him.  But obviously it takes a lot to show up and do it again at that level.”

The Australian winners’ table for 2021-22 is already taking shape with Deep Field (24) leading I Am Invincible (23) and All Too Hard (22).   Two of the more promising winners by All Too Hard this week have been the lightly-raced Island Bay Boy (Queanbeyan) and Sharper (Sale).

Island Bay Boy is a homebred for Tony Mullo and his dam Pressera (Domesday) is an older half-sister of Vinery stallion Press Statement.  “He’s never been in better shape now that he’s a four-year-old,” trainer Tony Sergi stated following a soft win in the TAB Federal Hcp (1200m) on Tuesday.  “He’s a good horse to have and the way he’s bred, I think he’s going to be a miler.

“He won the Guineas Prelude at Wagga and has come back bigger than ever.  He’s grown a hand and probably put on 50kg so I’m really happy.”

Blinkers sharpened Sharper in the Powered Solutions 3yo Maiden Plate (1529) at Sale on Sunday.  It was a low-key afternoon out for the budding All Too Hard stayer who will be given his chance in better grades by trainer Michael Templeton.

“From a young horse we’ve been pretty upbeat about his chances for the future,” Templeton said.  “We had been letting him find the line and going forward today paid off.  He likes a trip and could put his hand up in one of those staying features through the spring.”

Sharper’s dam Gypsy Whisper (Statue Of Liberty) was among All Too Hard’s fifth book at Vinery.  She’s a half-sister to Group 2 winner Whispering Brook and foaled a Press Statement colt last October. 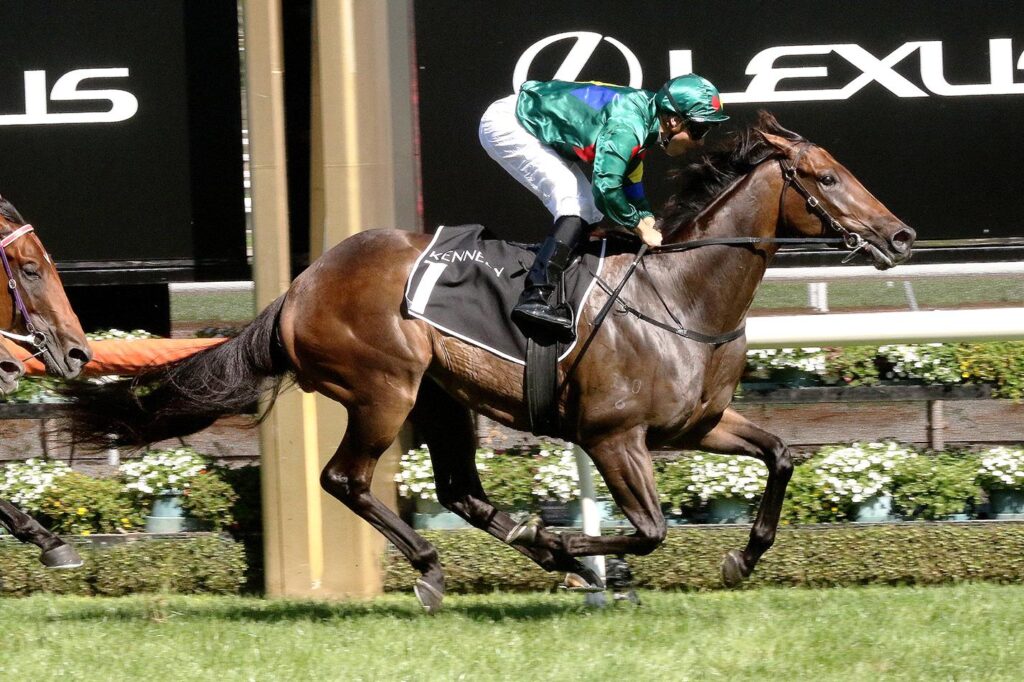