Trainer David Payne and long-term client John Cordina were still on Cloud 9 when their filly All Too Soon won the Task Retail Plate (1800m) in Sydney on Tuesday.

The daughter of Vinery sire All Too Hard confirmed her staying potential with a powerful finish to score by more than a length at Randwick.  She started a $2.60 favourite after filling out an All Too Hard trifecta at Randwick last month behind Warranty and Groundbreak.

Warranty franked that form-line when she was black-type placed in the Desirable Stakes-LR on Cup day at Flemington.

Payne and Cordina had won the Victoria Derby-Gr.1 with Ace High on Saturday and they could claim another classic with All Too Soon in the Australian Oaks-Gr.1 at Randwick in April.

“John has been loyal to the stable since I arrived from South Africa in 2002,” Payne said.  “He’s a pleasure to train for and I’m so happy for his success. This filly had a few setbacks but now it’s onwards and upwards and we can aim for the Oaks.”

Cordina bred All Too Soon from Gallant Tess (Galileo) and retained the filly after she failed to reach a $300,000 reserve at the 2016 Inglis Easter yearling sale.  She’s in good hands with Payne who prepared her dam to Group 2 victories in the Chelmsford Stakes & Breeders’ Classic.  He also trained her first foal Rock Hero to win the Dulcify Quality-LR.

Jockey Andrew Adkins said All Too Soon was always travelling like a winner.  “I made a move a bit before the turn and the last 100m was her best.  I can’t see why she won’t get a trip.  She’s lightly raced and has plenty to offer.”

All Too Hard stands at Vinery for a $44,000 (inc gst) service fee.  He has sired 20 individual winners of 26 races in Australia this season which puts him on top of both second-season tables.  Those figures also keep him humming along in second spot for Australian 3yo winners and wins behind champion sire Snitzel. 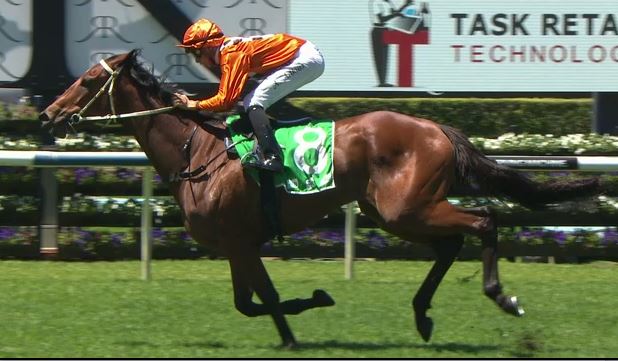