All Too Hard is the new No.1 on the Australian sires’ premiership after landing the first Group 1 blow of the season with Behemoth at Caulfield.

It’s All Too Hard’s first taste of life at the top of the table.  The Vinery champion leads from Snitzel and I Am Invincible one month into what will undoubtedly be a hard-fought season.  The leading trio were the first to break through $1million in earnings for 2021-22.

There was more good news for All Too Hard when the Alligator Blood camp reported their comeback galloper pulled up a treat following a first-up fourth in the Goldmarket Hcp (LR, 1200m).

But Saturday was all about Behemoth and his courageous victory in the $1million Memsie Stakes (1400m) at Caulfield.  He also became the first two-time winner of the spring opener since mighty mare Sunline in 2000-01.

Behemoth lost nothing with third-choice rider Brett Prebble putting him into the race and then getting first run at the top of the straight.  “He had to do it the tough way,” Prebble said after they held off Beau Rossa and the favourite Tofane.  “He was hurting for the last bit.  I wasn’t being too tough because he couldn’t give any more.

“I reckon he needed the run and will really come on from that.  He’s a big, robust horse and they’re going to have a lot of fun with him.”

Trainer David Jolly prepares him for Grand Syndicates who have now banked over $3.19 million from 10 wins in 24 starts.  He was a $120,000 purchase at the 2016 Inglis Great Southern Weanling Sale where he was offered by his breeder Tyreel Stud.

“That was a great race to watch and he joined some exulted company today,” Jolly said.  “He’s just like a proper old-fashioned weight-for-age horse.  Brett probably went early but he had to off that tempo.

“I thought we were in a great spot early but then they dropped anchor.  From the draw, I did tell Brett he could cruise around them and that’s how it panned out.  He wasn’t fully fit for 1400m and that told late.

“We’ve trained him that way because it’s only early in the spring.  He will probably have top-weight in the Sir Rupert Clarke but he’s pretty special.”

Vinery’s bloodstock manager Adam White was also on the front foot making a case for All Too Hard as the best value for money sire in the Hunter Valley.  “For the remainder of 2021 I don’t want to hear anyone say they can’t find a good proven sire below $50k.  Big Gr.1 race winning sire.  Top of the Sires list.  And 91% yearling clearance for 2021.  #AllTooHard”

Meanwhile, Alligator Blood remains on track for a Group 1 campaign in Melbourne – and a possible spring showdown with Behemoth – flights permitting out of Queensland.  He looked showy in the Gold Coast birdcage on Friday and made a move at the leaders in the straight only to peak passing the furlong.

“He has pulled up bright and sound from that first up effort,” trainer Billy Healey said.  “I will sit down with owners on Monday and decide where to next.  We have full confidence the horse will improve a lot from Friday.” 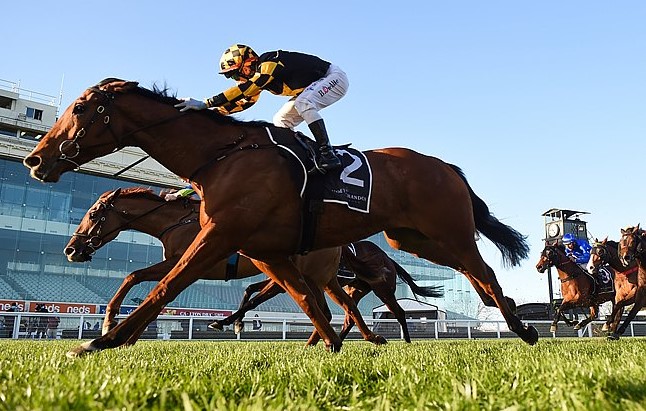