Locally based 3yo Baron Archer kept his unbeaten record intact at Sandown and then minutes later his 2yo Black Mamba was an eye-catching winner on debut in Singapore.

BARON ARCHER (3g Written Tycoon – Elyraq by Lacryma Cristi) had won at the first time of asking at Cranbourne last month and he went to another level second-up.  Settling at least 10 lengths off the leaders on the Lakeside circuit, he unleashing a brilliant burst in the straight to win going away.

“We’re looking forward to the future and I will nominate him for another 1400 metre race at Caulfield in a fortnight.  All going well, we might then step him up to a black-type race.”

Baron Archer is a homebred for Jeff Long, Mark Etherington and Darren Young.  “We raced his mum Elyraq and she was a more than handy racemare so we decided to give the breeding game a shot,” Long recalled.  “We sent her to Written Tycoon and Baron Archer is her first to race.  He was a massive foal and he never stopped growing!”

Long brought in several of his colleagues from Crown Casino and also got Gary Ablett Jnr involved.  The champion footballer loves horses and might find time to come down from the Gold Coast now that a shoulder injury has ruled him out for the season.

BLACK MAMBA (2g Written Tycoon – Dipping by Straight Strike) was just as impressive winning the UK Open 2YO Stakes at Kranji on Sunday.

Black Mamba was a clear last out of the barriers before Danny Beasley tacked on to the field along the back straight.  He swooped down the outside and, despite racing greenly, finished over the top of his rivals to score by over a length.

Trainer Theo Kieser is toying with the idea of backing him up in the G3 Juvenile Championship (1200m) on July 27.  “I will wait and see how he pulls up and discuss with Danny,” Kieser said.  “He has the conformation of a stayer but, on his work, I thought he would finish in the money today.”

Black Mamba is the final foal of NZ bred mare Dipping won 5 races in Sydney for trainer Bill Mitchell including the LR Triscay Stakes at Rosehill.  He cost Kieser $45,000 at the 2013 Inglis Melbourne Premier Sale.

Written Tycoon is now firmly established as one of the best stallions in Victoria and Woodside Park Stud has left his service fee unchanged at $12,500 (plus gst) in 2014. 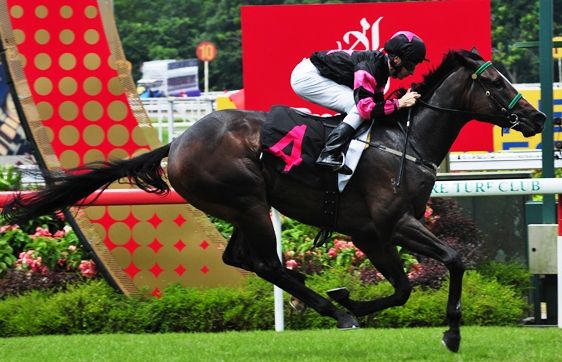