Black Heart Bart’s heroic victory in the G1 Underwood Stakes at Caulfield was a hard act to follow but Tellem We’re Comin wasn’t overawed in the WA Goldfields on Thursday.

Bart is the best horse sired by Blackfriars and Tellem We’re Comin became the 40th stakes winner by the Scenic Lodge champion in the LR Hannans Hcp at Kalgoorlie.

Black George won the first Hannans for Blackfriars in 2011 when he launched a last-to-first finish under Shaun O’Donnell.  This year’s edition followed the same script albeit with Willie Pike in the saddle.

Tellem We’re Comin started at $3 in front of a large holiday crowd but favourite punters were not on good terms coming to the turn.  “We were well back and trapped on the fence – I thought we were shot,” Pike conceded.  “But I got lucky when the run came in the straight.”

He angled the Grant and Alana Williams-trained gelding into clear air and they powered home to win in course-record time of 1:21.39 for 1400m.  That broke the previous mark held by Bradson since 1996.

“We had faith in Willie.  That’s his style,” Grant Williams said.  “He knows what he’s doing and we’ve just got to trust that he’s right.

“We came here confident with Tellem We’re Comin.  Alana galloped him on Monday and said it was the best work of his career.”

The Hannans improved his record to 7 wins in 16 starts for $400,000 in prizemoney including Westspeed bonuses of $115,000.  He came close to claiming black-type earlier this year when runner-up in the LR Bunbury Stakes.

Tellem We’re Comin is a homebred for Elio and Jacquie Galante.  They raced his dam Bonny Bonny (Bletchley Park) and second-dam Our Bonny Lass (Ron Bon) to numerous wins in their dark blue & gold silks.  Those colours were also worn with distinction by Australian Horse of the Year Scenic Blast who was conceived at Muchea.

Blackfriars (Danehill) will have his final crop of yearlings catalogued for the 2020 Perth Magic Millions and there could be more updates this Saturday with Come Play With Me in the G1 Metropolitan at Randwick and Gangbuster in the LR Kalgoorlie Cup. 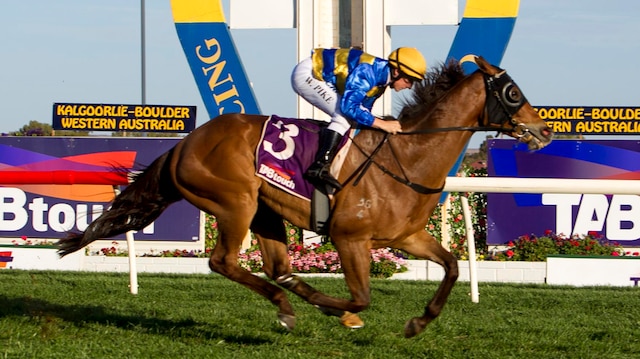