Blue Gum Farm sold its first seven-figure yearling when the Written Tycoon – Gybe colt (Lot 70) was knocked down to James Harron Bloodstock for $1.1 million at the Inglis Melbourne Premier Sale on Sunday.

Harron won a G1 Golden Slipper Stakes with Written Tycoon colt Capitalist and he outlasted Coolmore Stud for the Super VOBIS qualified colt who was bred by Dorrington Farm’s Rob and Sylvie Crabtree.

“This is our 40th year at the Inglis Melbourne Premier Sale,” Blue Gum owner Phil Campbell beamed as the colt returned to his stall in Barn A. “We were here when Oaklands opened and this is our first million-dollar yearling.  We knew he was a big-ticket item but you just don’t know where it will finish.

“You need everything to come together and he’s got it all.  He’s by Written Tycoon out of an early 2yo stakes winner at Randwick.  He’s a magnificent individual with the right pedigree and the right people were on him.

“Rob talked to us four years ago about prepping his yearlings and we’ve had some good results but this tops everything.”

Crabtree was also selling his first million-dollar yearling on Sunday.  “We’ve come close a couple of times and it’s so rewarding sharing it with such a quality team as Blue Gum,” he said.  “Anthony Cummings bought me Gybe as a yearling and she won a Gimcrack Stakes.  I like Fastnet Rock mares and she is back in foal to Written Tycoon.

“James will be sending the colt to Anthony Freedman so he will get every chance.  I would also like thank Coolmore for their support.”

Harron’s successful bid is the second-highest price-tag for a yearling at Oaklands bettered only by a $1.4 million I Am Invincible colt at the 2017 Melbourne Premier Sale.  “I expected him to bring that sort of figure,” he admitted.  “He’s beautifully bred and looks tremendous.

“He is a late October foal and has got a bit of furnishing to do.  Come the autumn next year he should be coming into himself.

“It has been a very competitive market since January and horses like that are in hot demand.  It’s pretty extraordinary and we’re very fortunate.  Six months ago, I don’t think anyone imagined we would be in this position.”

Following a measured start on Sunday morning, the fireworks began with the Written Tycoon colt and the momentum continued throughout the afternoon.

Yulong sold the second highest lot of the sale after Matt Laurie and Bahen Bloodstock went to $700,000 for a colt out of the Commands mare Our Daisy by Shalaa.

Catalogued as Lot 87, the Super VOBIS qualified filly from Humma Mumma (Bel Esprit) was bred by Brian Coyle and she received a black-type update on Saturday when her 2yo half-sister Tycoon Humma (Capitalist) won the LR Very Special Kids Stakes (1000m) at Flemington.

McArdle trains Tycoon Humma and he also prepared their older half-sister Humma Humma (Denman) to win last year’s G3 Proud Miss Stakes in Adelaide.  “We know the family and she’s a quality filly.  That meant the competition was very strong.

“Yesterday’s win was a great result but it probably hurt me today,” McArdle laughed after seeing off Ciaron Maher.  “But good luck to Michael and his team down at Flinders Park.”

Thoroughbred Breeders Victoria Executive Officer Charmein Bukovec commented, “It is pleasing to see the average rose 4% compared with last year’s sale. In the top ten lots sold, nine of these were from Victorian drafts and I am pleased to see Victorian breeders receive these results.”

Day 2 of the Inglis Premier Sale commences with Lot 266 at 10am on Monday. 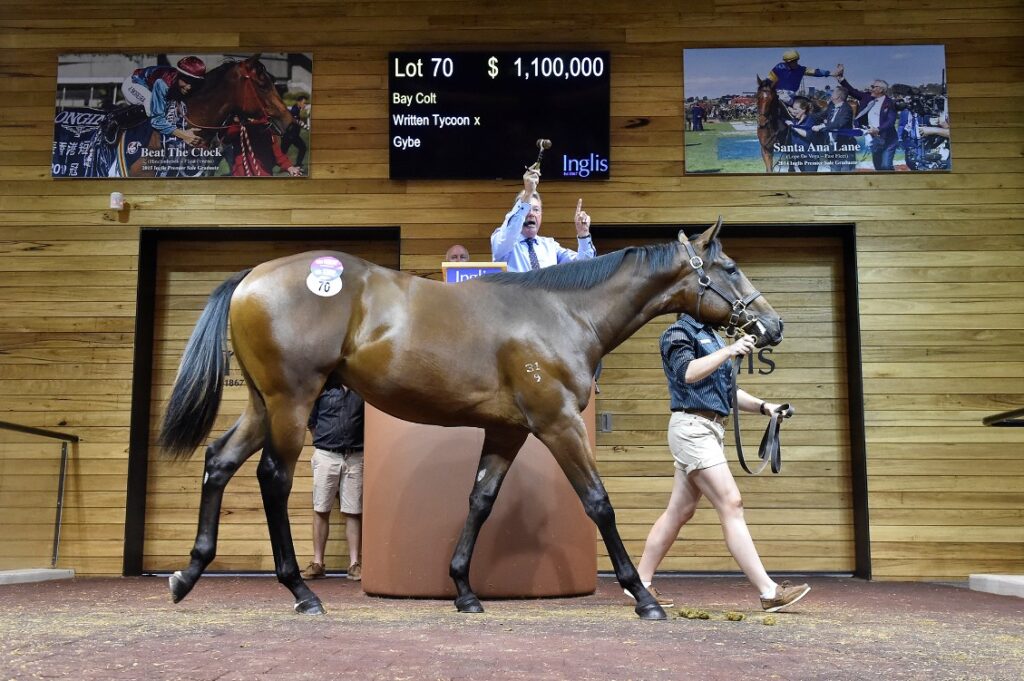