Gippsland trainer Peter Gelagotis said he would rather win a race at the Warrnambool carnival than in Melbourne after NZ-bred gelding Moss ‘N’ Dale saluted his large syndicate of owners on Thursday.

“The boys wanted to come here instead of Flemington on the weekend,” Gelagotis explained.  “They’re real people at the Bool and this is real racing.  We were up against a select field but he had a fitness edge.”

Moss ‘N’ Dale (NZ) won the Mercedes Benz Hcp (1400m) for a syndicate headed by Bluegrass Bloodstock (FBAA) manager Lenny Russo.  He started a $2.35 favourite after coming off a win on the road to Randwick last month.

“He wasn’t given any peace in the lead but he’s a fighter,” Gelagotis added.  “And he let down like a horse who loves heavy ground.”

Moss ‘N’ Dale (4g Castledale – Hot ‘N’ Moss by Strategic Prince) drifted across the track towards runner-up Guizot but straightened before causing any interference.  “He was looking for the better going out there – I wasn’t,” jockey Anthony Darmanin joked after returning to scale.  “He’s a real trier, he travelled all right and always puts in.”

Russo also sourced this year’s G3 Hobart Cup winner Count Da Vinci (Faltaat) from New Zealand and he has another two promising stayers ready to cross the Tasman.  “I’m excited about syndicating King of Sting and Dale Doback,” Russo said.  “They’re both lightly-raced and are still low in the ratings.”

King of Sting (Eighth Wonder) won a Pukekura maiden over 1600m in June 2016.  He’s a descendant of the famed “Belle” family and was last seen finishing midfield at Wanganui in March after being bumped at the start and in the straight.

Dale Doback (Road To Rock) was a courageous, front-running winner over 1600m at Otaki in December.  He’s the first foal of Heineken Lass (Golan) who also won at Otaki and at Awapuni. 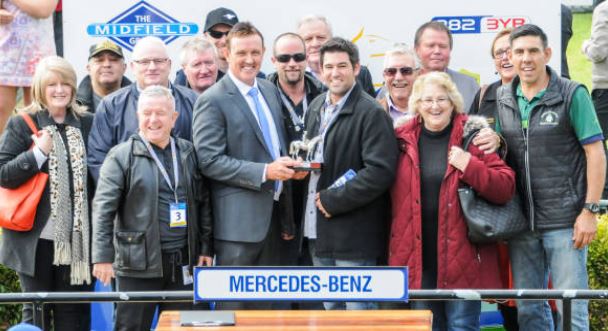