Boom Time has won four in a row in Melbourne and is primed to build a picket-fence in the Group 1 Australian Cup (2000m) at Flemington on March 11.

The Sunspeed-bred stallion completed a hat-trick at Flemington (2) and Moonee Valley late last year before finishing fifth in the Magic Millions Trophy at the Gold Coast.  He returned to his adopted home and to winning form in the Listed Mornington Cup Prelude (2000m) at Caulfield on Saturday.

“He’s earned a start in a Group 1 and a win would enhance his credentials as a sire,” Lindsay Park trainer David Hayes said.  “He’s got a stallion’s pedigree so we will definitely have a look at the Australian Cup.”

The $300,000 Mornington Cup (2400m) on March 25 is another worthwhile target.  The winner is guaranteed a start in the G1 Caulfield Cup in October.

Boom Time (5h Flying Spur – Bit of a Ride by Snippets) is a homebred for Kim Loxton who operates Ferrari Racing & Breeding in Serpentine.  He’s from a three-quarter sister to Scandinavia whose foals include Magnus and the dam of Black Caviar.

Magnus is also by Danehill’s Golden Slipper winning son Flying Spur and he has built a successful career at Sun Stud in Victoria.

Loxton sent Boom Time to Victoria after a Listed victory in the 2015 Melvista Stakes at Ascot but a tendon injury kept him sidelined for almost 12 months.  “We underrated him a little bit today,” Hayes admitted at Caulfield after the horse drifted to $9.  “His form has been impeccable in Melbourne and he’s obviously a pretty good horse on his day.” 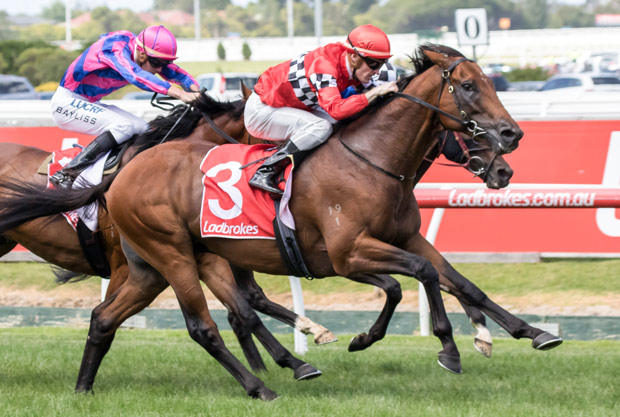