All American brought up an unlikely Melbourne double on Saturday when Brasada speared through a gap to win the Living Legends Hcp (1600m) at Flemington.

Brasada was also overdue and started at $13 despite the services of Damien Oliver on Saturday.  And he would have blown out to cricket-score odds at the clock-tower with short-priced favourite Eluding (Toronado) looking all over a winner.

But the race changed complexion in an instant when Oliver drove the Team Corstens war-horse through traffic and took lengths off the leader with a stunning burst of acceleration.  “He took every opening and responded really well to finish full of running,” the champion jockey said.  “He’s been unlucky but has raced at a high level all the way through and his form has never wavered.

“He was in a winnable race on Wednesday but it was my daughter’s graduation so I told Troy (Corstens) to save him for today!”

Brasada had won his maiden at Cranbourne in November 2018 but was sidelined until last season with tendon injuries.  “He’s a serious horse and has been up for ages so it’s a real credit to our staff at Flemington and Geelong,” Corstens declared.  “We have a really good rehab program and have had a lot of success – Spring Choice is another horse that came back and won races in Melbourne after going amiss.”

Geisel Park has entered three yearlings by All American for the 2022 Perth Magic Millions including the full-brother to G1 Queensland Derby winner Dark Dream (Lot 91).  Alwyn Park (as agent) also offers an All American colt from Cathay Belle (Northern Meteor) who is related to Group 1 winning sprinter Super Elegant. 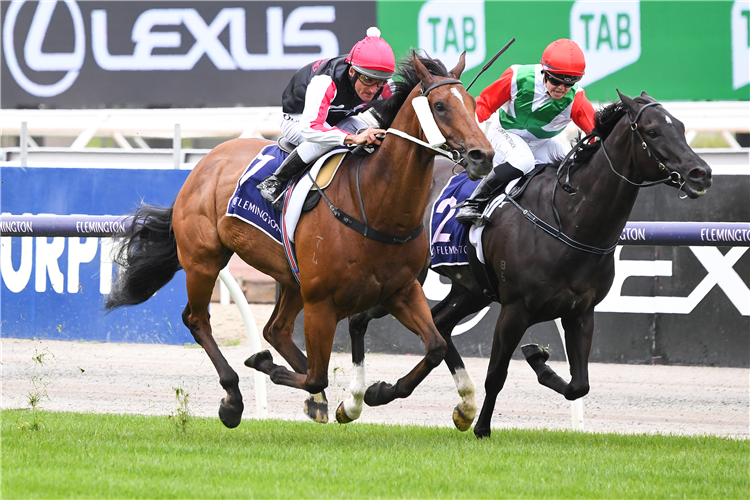 BRASADA
All American sprinter accelerates past Eluding at Flemington