Downloading emulated his older three-quarter brother Buffering with a debut win at Doomben on Wednesday.

Starting a well-supported favourite, he led from barrier-to-box to claim the Shannons Air Plate (1050m) by a half-length.  “He has a long way to go but I always felt he would be better for the run,” trainer Rob Heathcote said.  “In fact, I really thought he wouldn’t be winning until he was a three year-old.

“He continues to improve and a lot of Buffering’s owners are in him as well.”

Downloading was $75,000 buy at the 2015 Gold Coast Magic Millions yearling sale and he’s the fifth winner from as many to race for Action Annie (Anabaa).

His sire Love Conquers All stands at Sun Stud’s base in Queensland.  Like Buffering, he is a son of Mossman and leads Australia’s freshman sires this season with 7 individual winners.

Buffering won on debut at Doomben in March 2010 and his earnings reached $7.26 million after another brave victory in the G1 Al Quoz Sprint (1000m) in Dubai earlier this year.  He will be favoured to win an unprecedented fifth Queensland Horse of the Year when the votes are collated for 2015-16. 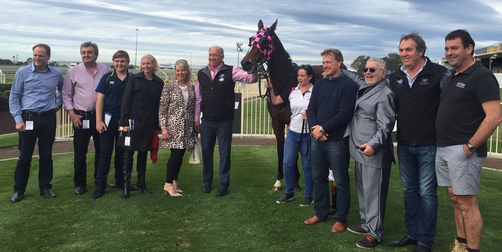