Cyclonical posted the sixth win in seven days for Scenic Lodge champion Blackfriars with a fighting, victory in the Waratah Fencing Maiden (1000m) at Mt Barker on Friday.

The Scenic Lodge champion kick-started this week’s streak with Last Of The Line in the LR Detonator Stakes (1800m) at Ascot last Saturday.  In the post-race interview, trainer Stephen Miller was weighing up whether to tip him out or head towards the LR Bunbury Cup (2000m) on March 6.

“That was mind-boggling,” Miller said.  “He was actually going too well at the 800m.  Ryan (Hill) took off early but he had no choice.  This horse has a real good race in him.”

Last Of The Line (4g Blackfriars – Catch The Cat by Royal Abjar) has won 6 of his 9 starts for earnings of $348,440.  That includes Westspeed bonuses of $93,000 for a syndicate that includes owner-breeder Lindsay Rogers plus Trevor Sanders, Bob Wilson and Kevin Gould.

The Bunbury Cup is one of few black-type events to have evaded Blackfriars in WA.  He’s won the Bunbury Stakes with Black Heart Bart (2015) and Young Lionel (2016).

Blackfriars added a second Ascot win on Wednesday with Born To Try in the Quayclean Hcp (1600m).  She is prepared by Lindsey Smith for former Perth-based owner-breeders Michael and Carolyn Grant who relocated to Victoria two years ago.

Blackfriars wrapped up the week with three new winners on Thursday and Friday.

Bonjour Noir completed a 3yo running double in the south-west when putting a space on the MGIB Maiden Plate (2038m).  He started at $51 following a first-up, dozen-length loss over 1675m a fortnight ago.

Raced by Fred and Judith Kersley, he was bred and sold for $40,000 by Misty Valley Thoroughbreds at the 2019 Perth Magic Million.  First dam Hello Again (Encosta De Lago) is an older half-sister to Debellatio (G3 WA Sires’ Produce Stakes).

Cyclonical and Kyra Yuill teamed up for what could be the first of many wins together at Mt Barker.  Appearing on debut for trainer Rebecca Wallrodt, she led and did best in a two-horse war with Distinct Racing’s first-starter Double Rush (All American).

They came together at the 600m pole and there was still only a short-head in it at the finish.  She had won a 1000m barrier trial at Albany’s most recent Sunday meeting on February 12 and had been kept up to the mark galloping and wading at Quaranup Beach.

Owner Aaron Chircop bred Cyclonical and she’s the only foal to date from Miss Cyclonic.  He sent the Trade Fair (Ire) mare to Blackfriars in 2016 – the penultimate of 17 books at Scenic Lodge. 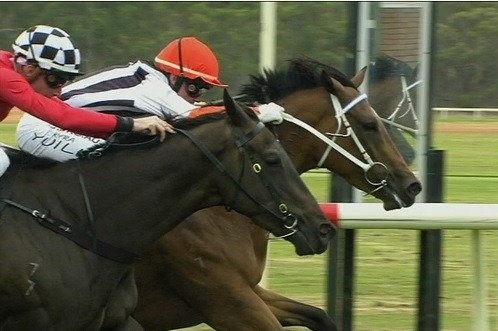