Rosehill winner Caesars Palace is in good hands while his trainer Anthony Cummings is recuperating at home after ankle surgery.

The Casino Prince 4yo gelding was saddled by stable foreman Jono Crowley on Saturday and jockey Jason Collett followed instructions to the letter in the TAB Hcp (1800m).

Caesars Palace was peaking at his fourth run back from a spell and kept finding to deny Kirkeby (Kermadec) on a Heavy 8.  “It was a phenomenal ride by Jason,” Crowley said.  “This horse is as tough as old boots but has to be held together for as long as possible into the straight.

“He’s genuine, goes in all ground and there were excuses in his first three starts this prep.”

Caesars Palace is raced by a large Cummings-managed syndicate who gave him plenty of time to mature.  He won a Goulburn 1600m maiden as an autumn 3yo twelve months ago and rose through the grades at Newcastle and Hawkesbury before a city breakthrough at Rosehill in January.

“I would have preferred if something had taken us further into the race,” Collett told Sky Racing.  “He travelled well and, after changing legs at the 600m, found his way back on to the bridle.  Then it was just a matter of timing his run in the straight.”

Casino Prince (Flying Spur) cost $140,000 from Baramul Stud at the 2005 Gold Coast Magic Millions and earned over $1.16 million in a career topped by a Group 1 in the Chipping Norton Stakes (1600m) at Randwick.

Soffraaj was catalogued for the 2014 Magic Millions National Sale by Coolmore Stud and was knocked down for $50,000.  Retired unraced, she foaled Caesars Palace second-up and her current 2yo is a promising colt with Cummings named Kote (Choisir).  He finished right behind the placegetters in the ATC Pago Pago Stakes (Gr.3, 1200m) at Rosehill in March.

Caesars Palace is one of 409 individual winners by Casino Prince and the best of them has been All Too Hard who joined the Vinery roster after being named Australian Champion 3YO Colt in 2012-13. 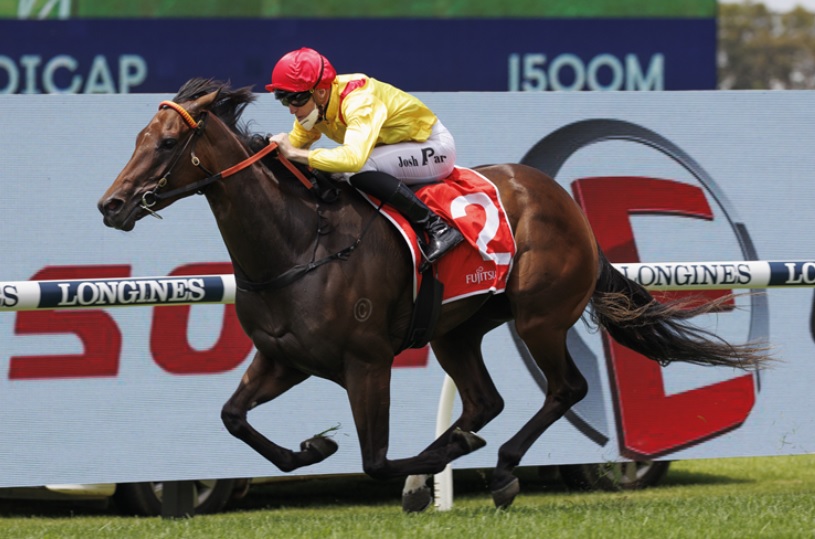