The Stephen Gray-trained star bullocked through a gap at the furlong to blitz his rivals in the Kranji Stakes (1200m).  Stable apprentice Amirul Ismadi even had time to salute the crowd and a $500 fine from stewards failed to wipe the smile from his dial.

Lim’s Cruiser (6g Casino Prince – Hope Downs by Good Journey) was voted Singapore’s Champion Sprinter after winning his second Lion City Cup Gr.1 in May.  It earned him an invitation to Hong Kong next month and racing manager Craig Geehman confirmed the trip subject to the field being finalized.

“We received the call-up from the Hong Kong Jockey Club before tonight’s race and, regardless how he went, we would have accepted.  Hong Kong has been on the agenda because there’s a lack of opportunities for him at this level here.”

Lim’s Cruiser has won 8 times in 18 starts and has earned the equivalent of AUD 1.70 million for owner Lim Siah Mong.  He was a $100,000 buy at the 2015 Magic Millions National Racehorse Sale and won a Gold Coast trial for Gillian Heinrich before transferring to Singapore.

“I’ve been working this horse from Day 1 and I’ve been waiting for an opportunity to ride him for a long time,” Ismadi said.  “They went fast in front but I had plenty underneath and once he found the gap, he was just too good.”

Casino Prince is also doing what he does best in Australia with winners like Sweet Deal who landed a plunge at Rosehill on Saturday.  Bred by Phillipa Cooper, she made $67,500 at the 2016 Inglis Classic Yearling Sale and had already earned minor black-type in the Widden Stakes Gr.3 and Inglis Classic RL at Randwick

Casino Prince, who stands at Vinery for a $9,900 (inc GST) service fee, has been represented by 37 individual winners so far this season and is on track to sire 100 winners for the fourth year in a row. 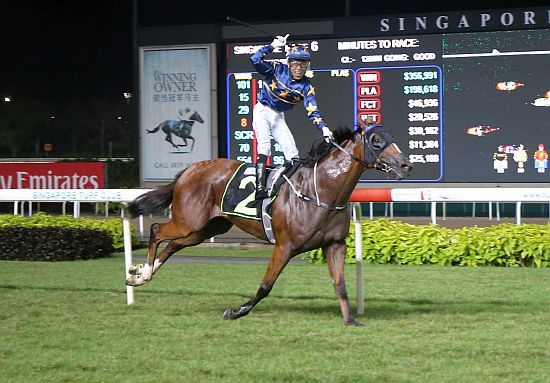