The Casino Prince revival continued at Randwick on Saturday when his consistent sprinter Bandersnatch broke through at Listed level in the Carrington Stakes (1200m).

Bandersnatch has gone to another level since joining Team Hawkes.  The Carrington improved his record to 6 wins in 16 starts for prizemoney of $397,430 including BOBS bonuses of $45,000.

It also provided Casino Prince with his 20th individual Stakes winner.  A Vinery Stud stalwart since transferring from Patinack Farm in 2013, he has sired 375 winners at a tremendous 71% strike-rate.

Those figures and active black-type gallopers like Baccarat Baby, Sweet Deal and The Candy Man saw his 2020 book climb to 90 mares at a $5,500 (inc GST) service fee with a large percentage made up of owner-breeders.

Sweet Deal won the Toy Show Quality Gr.3 at Randwick in August and added the $1 million The Hunter at Newcastle in November.

Bandersnatch (4g Casino Prince – Divine Faith by Falbrav) sold for $42,000 to Gerald Ryan at the Inglis 2018 Inglis Classic.  “I really liked him on type at Classic,” Ryan recalled.  “He’s always had ability and we had black-type plans for when he matured.”

Under Ryan, Bandersnatch had won three from four this time last year at Hawkesbury, Randwick and Rosehill before the stable change.  The heavy lifting had already been done and Michael Hawkes confirmed the gelding arrived in good order.

“He has had a great prep and should be three for three for us.  He was brilliant first-up at Moonee Valley and has been a bit stiff in his last two starts.”

Hawkes also gave kudos to Tommy Berry for a great ride.  He had Bandersnatch poised to strike at the furlong before letting him lengthen to a three-quarter length victory over Quackerjack (Not A Single Doubt).

Bandersnatch is the best of three winners from five to race out of Divine Faith.  She is from a USA-imported half-sister to the dam of the former Arrowfield Stud shuttler Unbridled’s Song.

In Singapore on Saturday, Royal Pavilion logged his latest win for Casino Prince and trainer Michael Clements.  Tivic Stable’s Peter Loke bought him for $50,000 from Vinery at the 2017 Inglis Melbourne Premier and he has now earned the equivalent of AUD 162,400.

Casino Prince’s winning strike-rate is an incredible 86% at Kranji.  Lim’s Cruiser lords it over his expats with consecutive Champion Singapore Sprinter Awards in 2017 and 2018. 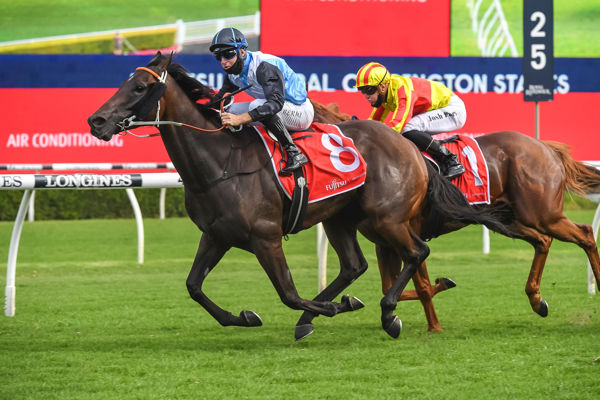