Group 2 winning sprinter Time For War has died after a severe bout of colic at Kitchwin Hills in Scone.

The 5yo son of Snitzel had covered two books at Kitchwin Hills for a $12,100 (inc gst) fee alongside Dane Shadow and Duporth.

“We will miss this guy,” stud manager Mick Malone said.  “He was destined for great things.  RIP Time For War.”

A debut winner at Rosehill as a November juvenile, he returned from a spell to capture the G2 Pago Pago Stakes (1200m) and stayed in training to claim another Group 2 when defeating Brazen Beau in the Brisbane Sires’ Produce Stakes (1350m).

Time For War’s winning time of 1:18.75s in the Sires’ Produce was faster than Zoustar clocked in the same race the previous year.  “Breeders will be completely blown away when they see this horse,” trainer Gerald Ryan said.  “He is so like Snitzel!”

Darby Racing purchased Time For War for $56,000 out of the Arrowfield Stud draft at the 2013 Inglis Scone yearling sale.  His dam Lady Zabelia (Zabeel) won three races up to 1800m in South Africa and second-dam Miss Power Bird is a stakes winning half-sister to Lucky Owners (G1 Hong Kong Derby) and the dam of champion filly Mosheen. 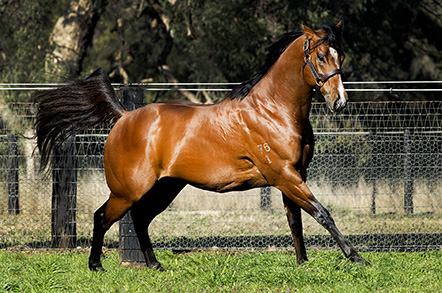