Double Spice moved out of the shadow of his younger brother Ima Single Man to win the Free Entry Maiden (1300m) at Belmont Park on Wednesday.

The Gingerbread Man 3yo was forced to cover extra ground from an outside gate but was too strong for the favourite My Hidden Journey second time out under Shaun McGruddy.

“He’s taken time and pulled up with a foot abscess after his first run at Pinjarra,” trainer Stephen Miller revealed. “He had been working well and I expected him to run a good race.

“I would rather him racing out wider at this stage because he’s still learning. He’s got ability and really knuckled down in the straight today.”

Double Spice was bred at Yarradale Stud and owner Ron Sayers kept a share after Oliver Kiddie and Mark Wilson bid $50,000 at the 2018 Perth Magic Millions. His dam Single Spice had another Gingerbread Man catalogued the following year but he was retained by Sayers when failing to make a $60,000 reserve.

Named Ima Single Man, he won this year’s G2 Karrakatta Plate and was then sold to Hong Kong.

Single Spice (Not A Single Doubt) won a LR Supremacy Stakes in 2011 and she delivered a filly by Gingerbread Man last October. It was her seventh foal in as many seasons and she was subsequently given a year off.

“I did have cover for the first half of the race but then got posted wide,” McGruddy declared after bringing Double Spice back to scale. “They were only creeping along so I moved up on straightening only to have Willie (Pike) come out and leave me four wide.

“It was a huge effort to win.”

Gingerbread Man is a son of Shamardal who died in Ireland earlier this year aged 18. Champion European 2yo Pinatubo was one of three Group 1 winning juveniles by Shamardal in 2019 along with Earthlight (Middle Park Stakes) and Victor Ludorum (Prix Jean-Luc Lagardere).

Shamardal (Giant’s Causeway) will be sorely missed by breeders in Europe but there are plenty of his sons at stud headed by Lope De Vega, Amaron, Bow Creek, Dariyan, French Navy, Mukhadram and Sommerabend.

He shuttled to Australia from Sheikh Hamdan’s Kildangan Stud and his most successful sire son from those southern books is Gingerbread Man. Bred in NSW, he was shipped off-shore to become Champion 2YO and 3YO in Singapore. 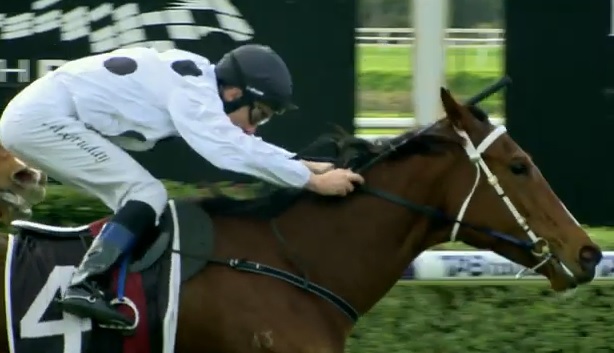