Impressive Racing took a punt when buying an unproven 12yo mare at the 2017 Inglis Great Southern Sale in Melbourne.

Dance On Air (Perugino) had won six sprints in Melbourne for Contract Racing but had been a disappointment at stud when agent John Chalmers bought her on behalf of Impressive partners Darren McAuliffe and Kevin Berry at Oaklands.

She cost $18,000 in foal to Rosemont Stud’s Group 3 sprinter Nostradamus (Medaglia D’Oro) and only delivered the one foal in WA before being pensioned in August.

But the last one was a good one and then some.  The Nostradamus was a filly named Clairvoyance by the Impressive team but they couldn’t have dreamed she would be Perth’s early leader for 3yo honours this season.

Clairvoyance completed an unbeaten Belmont hat-trick in August and then dominated a strong field assembled for the Crown Perth 3yo Classic (1000m) at Ascot on Saturday.  She sat on the speed for Chris Parnham and then sprinted to a two-length victory over Queen Brown (Patronize) and Gemma’s Son (Snippetson).

“The ratings from the winter suggested she was above average and she has come back in great order,” McAuliffe told RWWA.  “The world is her oyster.

It completes a stunning comeback for Impressive Racing so soon after the demise of its Group 1 star Gatting at Flemington last month.

McAuliffe said they had received offers from potential buyers in Victoria, but they had not been anywhere near what was required.  “We’ve been offered $600,000 but we wouldn’t sell her for that,” he explained.  “We can win plenty of nice races here in Perth and continue to build her prizemoney.

“Then we can put her in a broodmare sale and she would be potentially worth plenty there, so $600,000 is almost disrespectful.” 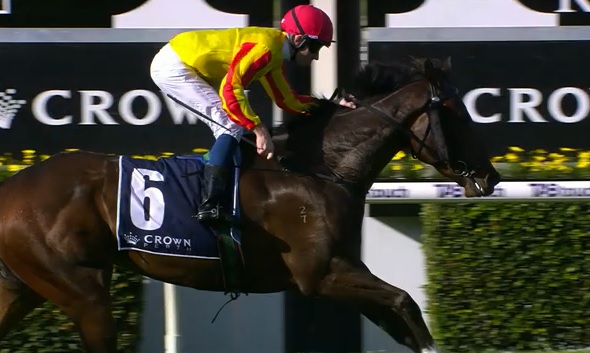