Master Of Design’s trainer David Payne will saddle one of the first runners by Swettenham Stud’s freshman sire this season.

Payne prepares Magic By Design who was forward enough to contest the opening two year-old trial of the season at Randwick on Monday.  Her dam Margene (Magic Albert) is a sister to Group 1 winner Albert The Fat (VRC Emirates Stakes).

Master Of Design (Redoute’s Choice) won the G1 T J Smith (1200m) at Randwick in a time only bettered by Black Caviar.  “I think Master Of Design is a stallion with real potential,” Payne declared.  “He was a serious horse and had to overcome a couple of setbacks to win the T J Smith.”

Lee Freedman bought the most expensive Master Of Design yearling earlier this year when paying $300,000 at the Inglis Melbourne Premier.  The record-breaking colt is a half-brother to Trust In A Gust and has pleased the Hall Of Fame trainer at Flemington.

“He had no issues being educated and our breaker Mark Stephenson reckons he’s a tractable and forward type,” stable foreman Steve Adams said.  “And Mark is usually right on the money.”

The colt is owned by Ozzie Kheir who had a share in Master Of Design and he was very keen to buy one from his first-crop.  After a six-week freshen-up at Freedman’s St Ives property, the colt will begin pre-training at Pinecliff before returning to Flemington.

Wendy Kelly is another Group 1 trainer more than happy with Master Of Design.  Her filly is a half-sister to Fast Cash who won the $180,000 VOBIS Gold Carat and was stakes placed at Moonee Valley last season.

“She’s been named Faster By Design and will be raced by a syndicate from Ken King Thoroughbreds,” Kelly said.  “She’s very smart and we will be looking for more Master Of Designs if they’re as good as her.”

Caulfield trainer Ciaran Maher has a Master Of Design – Parnissius colt that changed hands for $180,000 at the Gold Coast Magic Millions.  “He’s a beautifully balanced horse and, although my two-year-olds are still in the early stages, he’s one in particular who is coming on nicely,” Maher said.  “I will be stepping things up in the next few weeks and it will be very interesting to see how he turns out.”

The Hong Kong Jockey Club was also in the market for a Master Of Design at the majors and paid $210,000 for the Sparkling Symphony colt at the Melbourne Premier.  He was bred by Swettenham owner Adam Sangster and had been pin-hooked as a foal by NZ based Henley Park owners Mark & Sarah Devcich.

“We loved Master Of Design as a racehorse and as a type, and when we saw his first progeny at the sale we picked out our colt as he had a lot of the sire about him,” Sarah Devcich said.  “He’s a lovely balanced and well-marked colt and grew very evenly all the way along.  We just let him do his thing.”

Master Of Design has been solidly booked by breeders since retiring to Swettenham and there are 93 foals in his first crop.  He is standing for a $15,000 (inc gst) service fee this year. 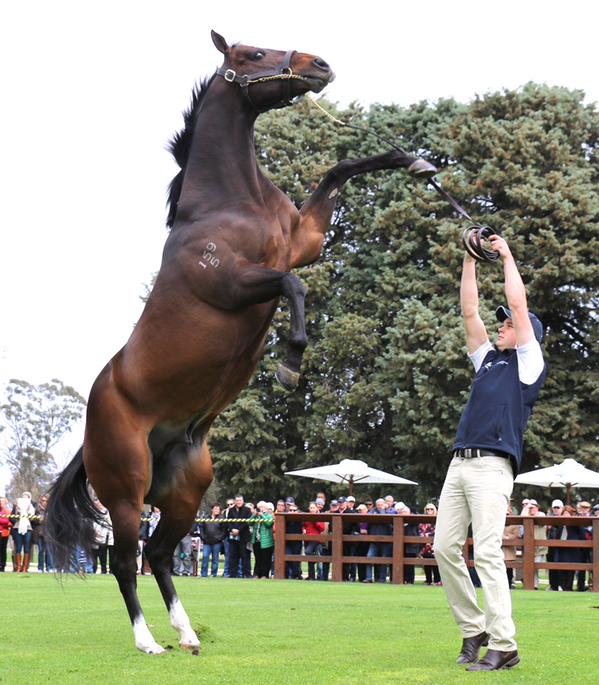