Mogumber Park sire Natural Blitz received an international update to his pedigree on Saturday and there’s another local one looming in the weeks ahead.

Natural Blitz (Dehere) is from a family of stakes winners.  His NZ bred dam Mohave Dancer (Zabeel) was a Listed winner of the AJC Reginald Allen Hcp and her Sunspeed son claimed G2 victories in Melbourne, Sydney and Brisbane.

His younger half-sister Our Mohave (Fusaichi Pegasus) provided more black-type when her exciting filly Mohave Princess won LR Devon Air Stakes at Clairwood on Saturday.  She was sent to South Africa as a foal after making $18,000 at the 2011 Magic Millions National Sale.

Mohave Princess (Mount Nelson) moved up smartly to collar Dubawi front-runner Magrooma down the straight course in Durban.  She asserted her authority in the final stages to win going away by over a length.  Trainer Gavin Van Zyl has numerous options for the filly during the July carnival.

Closer to home, Natural Blitz stayer Destroy will race second-up in the G3 Hyperion Stakes (1600m) at Belmont this Saturday.  The Jeff Noske trained gelding will climax a short winter campaign in the G3 Strickland Stakes (2000m) on June 29.

Destroy won the LR Bunbury Cup (2200m) in March and he is one of 14 first-crop winners by Natural Blitz.  They have saluted at a 61% strike-rate.

Mogumber Park’s Colin Brown has catalogued a well-bred Blackfriars colt at the Perth Magic Millions Winter yearling sale this Sunday.  Listed as Lot 67, he is a half-brother to winners in England and Hong Kong.

Natural Blitz also has a filly coming down from Temuka Park for Sunday’s Sale.  Catalogued as Lot 65, she is the first foal from a daughter of Ascot stakes winner Oxidation. 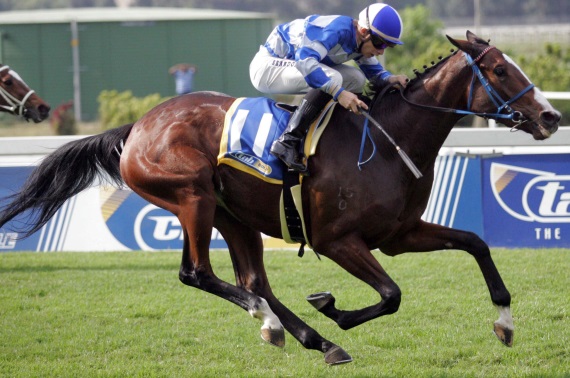