A buying-bench boosted by FBAA members recorded across-the-board gains at the Karaka Ready to Run Sale this week.

Mark Pilkington Management led Federation of Bloodstock Agents Australia with $400,000 for a Fastnet Rock full-brother to Formality.  The Coolmore Stud filly won the G2 Silver Shadow Stakes at Randwick in August before finishing her spring campaign with a Group 1 placing in the Coolmore Stud Stakes at Flemington.

They are from Singapore Horse of the Year Jolie’s Shinju and the colt is also slated to join his sister at Lindsay Park.

Blue Sky Bloodstock (FBAA) agent Julian Blaxland weighted in with $960,000 for a half-dozen lots led by the Tavistock – Diva Down Under colt that made $260,000.  His dam is a half-sister to NZ G2 Eclipse Stakes winner Gobi Ranger.

“We are absolutely rapt with that result,” vendor Nick Fairweather beamed.  “We bought him as a weanling out of the paddock from the breeder but he was immature and the yearling sales came up a bit too soon.

“You generally find those nice young foals come back around and he thrived in time for the Ready to Runs.  He went from strength to strength and that showed with the high interest in him.”

The Artie Schiller is a half-brother to Kabayan (Haradasun) who won the G2 Stan Fox Stakes in Sydney before relocating to Hong Kong where he won the Kwangtung Cup for John Moore.

Mitchell purchased Hinchinbrook’s rising star Beat the Clock from Prima Park’s draft at the 2015 Karaka 2YO Sale.  He is trained by John Size and won for the 5th time in 10 starts at Sha Tin last Sunday. 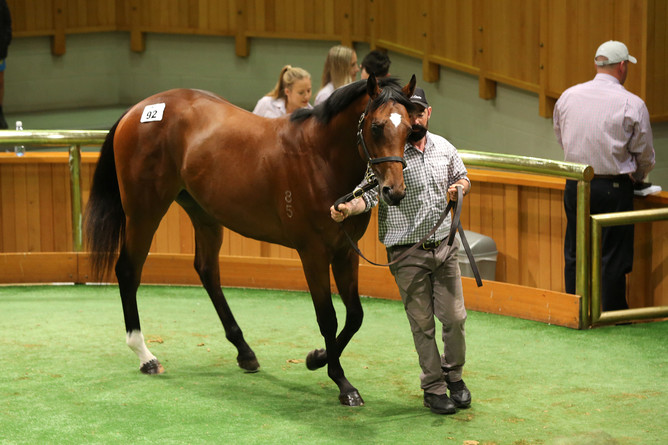