Fituese (Deep Field) was bred at Lynward Park and sold for $55,000 through the WBA consignment to the 2018 Perth Magic Millions.  The Toy Show improved her record to 7 wins in 14 starts for $440,465 in prizemoney banked by Prime Syndications.

“She’s a lovely mare and very honest,” trainer John Thompson said after watching the winner come from well back off a quick tempo to claim a neck victory.  “I thought it would be hard from the wide gate but Jean (Van Overmeire) did very well.  It was an 11 out of 10 ride.”

WBA partner Darling View Thoroughbreds completed a double for WA’s leading vendor later on Saturday with Iseered Iseered at Belmont.  He was a $30,000 buy for trainer Luke Fernie at the 2019 Perth Magic Millions and has now earned $163,464.

“I was using this as a barrier trial so it’s turned out a good result,” Fernie said after the first-up victory.  “We rode him colder today to improve his manners and stretch him out.  The owners live in Kalgoorlie and there’s a Saturday race for him during the Round.”

Iseered Iseered (Safeguard) landed a plunge on debut at the 2020 Kalgoorlie Cup meeting but was sidelined for six months before resuming earlier this year for a running double at Ascot.

Trainer Adam Durrant unveiled a very promising Western Breeders Alliance graduate when Celevacci (NZ) won the Amelia Park Maiden (1400m) on August 11.  He was left in front a long way from home on debut but knuckled down like the real deal.

“He’s green and did get there a bit early,” stable foreman Jason Miller agreed.  “The track is a test for young horses today and it was good to see him sustain that run right to the line.”

Celevacci (Tivaci) cost $60,000 from WBA at the 2020 Perth Magic Millions.  His dam Celebrate (Savabeel) also foaled Durrant’s LR WA Carbine Club Stakes winner Pinzu (Pins).  “He’s a good-natured horse and is similar to Pinzu but a bit bigger,” Miller added.  “He’s only going to keep improving and will get over more ground.”

Over in Victoria, WBA graduate Ranveer is back in work for a spring campaign with trainer Matt Laurie.  “He’s a classy colt and I thought he was a standout at the Perth Sale,” Laurie said.  “He enjoyed his work on the water-walker at Fulmen Park and looks an absolute picture now.”

Ranveer (Winning Rupert) won at Sandown during a short winter prep and has been nominated for the G1 Caulfield Guineas (1600m) on October 9.  He was bred and sold for $200,000 in the Swan Valley last year by WBA partners Wayne and Jane Beynon of Einoncliff Park at Boyanup. 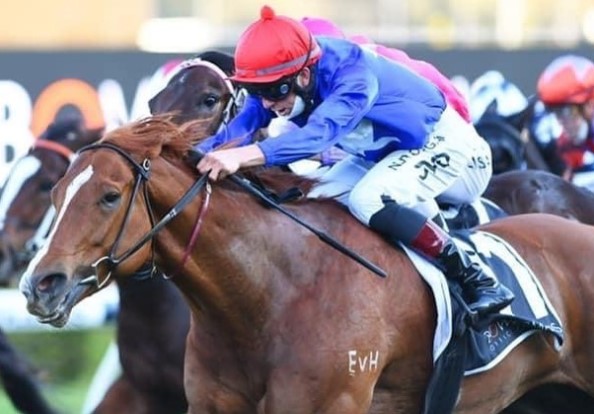