Master Of Design lit up the Oaklands Junction auditorium on Tuesday afternoon with a $300,000 half-brother to Group 1 winner Trust In A Gust.

The colt was purchased by Lee Freedman for a syndicate headed by Ozzie Kheir.

Freedman and Kheir were determined to acquire the Master Of Design – Subtle Breeze colt (Lot 546) bumping up quick-fire bids before having the final say at $300,000.

“Ozzie raced Master Of Design when he won the (G1) T J Smith at Randwick and was very keen to buy one from his first-crop,” Freedman said.  “I told him the best of them was this bloke.  He’s a got a beautiful pedigree and is a great physical specimen.”

Kheir is part of the syndicate that races Melbourne Cup winner Protectionist and he’s also helping to kick-start the training partnership of Freedman and his brother Anthony at Flemington.

Master Of Design’s first yearlings from Swettenham Stud were in demand during Premier I.  He had 14 lots change hands at an average of $106,786 – the leader among Victorian first-season sires ahead of Helmet, Canford Cliffs and Toorak Toff.

Apart from Trust In A Gust’s half-brother, his Day 3 graduates included a $210,000 colt from Sparkling Symphony bought by the Hong Kong Jockey Club.  And his Day 2 leader was a $200,000 filly from Hidden Energy purchased by leading agent James Bester.

“Master Of Design has got a better pedigree and a better race record than all the other young sons of Redoute’s Choice,” Swettenham owner Adam Sangster said outside Barn F on Tuesday.  “The response has been great and it’s a credit to Brian (Gorman), Tim (Jones) and the whole team.” 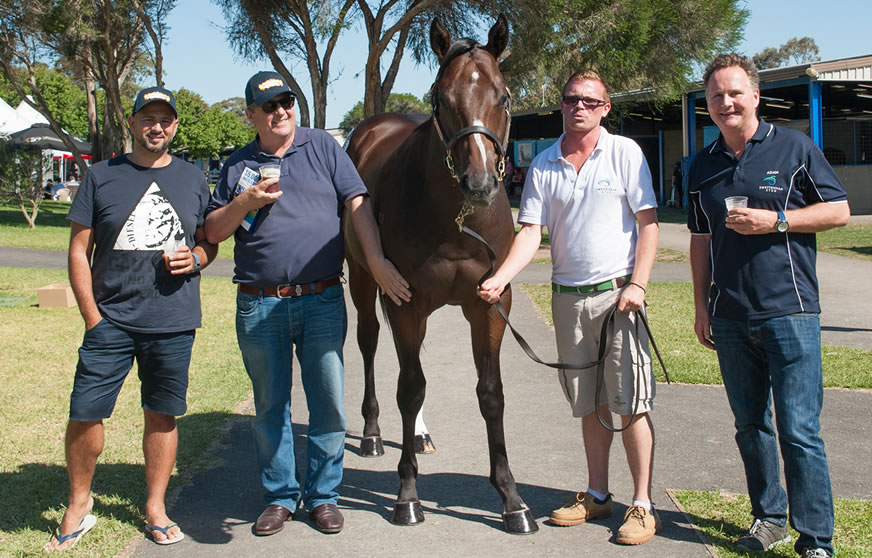 L-R: Ozzie Kheir, Lee Freedman and their Master Of Design half-brother to Trust In A Gust
with strapper Adam Rumsby and Adam Sangster