Alsephina didn’t go around a horse in the Heineken 3 Maiden (1100m) at Ascot on Good Friday and that ensured punters didn’t miss a good collect on the heavily backed favourite.

The 3yo daughter of Vinery sire Star Turn was given every chance at her first outing after firming into $1.80.  “The leaders put the speed on and when they rolled off the fence, we got a good run through,” jockey Chris Parnham said.  “She lengthened but pricked her ears and looked around once we got to the front.  She’s still new and feels like a nice filly going forward.”

Alsephina was bred by G&G Bloodstock owners Michael & Carolyn Grant who relocated from Perth to Victoria in 2019.  They race her in a partnership that includes trainer Grant Williams and his wife Alana, Neil Pinner, Tony Buhagiar, Chris Chalwell and Tim McLernon.

Her dam Delta Gee (Street Cry) won the LR Natasha Stakes at Ascot in 2009 for the Grants who retain links to WA.  Delta Gee was pensioned last year but they sent her daughter Valtellina (Blackfriars) to Yarradale Stud earlier this season for a maiden cover to Gingerbread Man (Shamardal).

Grant Williams, who had to put a Melbourne move on hold while restrictions remained in WA, will give Alsephina a break before coming back for the Belmont winter season.  “She will be better when the tracks aren’t so hard.  She’s well above average and has put on some size in the last six months.

“She was immature and we had to send her up to Gary & Fenella Martin for barrier practise.  I liked the way she let down and hit the line today.  It’s nice to have some good young ones in the stable.”

Williams also prepares Colossal (Snitzel) who won a Pinjarra maiden on Wednesday for Vinery partners Steve McCann, Neil Werrett and WA-based breeder Craig Thompson.  The 3yo colt has pulled up well followed his debut and he’s another on the easy list before Belmont resumes for the Roma Cup meeting on May 14.

Star Turn’s Brisbane-based 3yo filly Startantes returns to action this Saturday in the Mick Dittman Plate (LR, 1100m) at Doomben.  She was last seen flying home to just miss out in the Group 1 Surround Stakes (1400m) on a Heavy 10 at Randwick in February.

Trainer Rob Heathcote is confident Startantes can break through at the top level during the winter carnival.  “She will get something like 49kg in the (Gr.1) Stradbroke and then there’s the (Gr.1) Tatts Tiara.  She was very impressive getting home in a Doomben trial last Tuesday and that showed me she’s right back to her best.”

Cordyceps Six has black-type potential on the back of a 50% strike-rate in 10 starts.  “I think he’s one of the best three year-olds we’ve seen in several years,” trainer Richard Gibson claimed.  “He shows a lot of class and has a very good future.”

Gibson saddles Wellington (All Too Hard) for his defence of the Group 1 Chairman’s Sprint Prize (1200m) this Sunday, April 24.  Raceday jockey Alexis Badel gave him a quiet spin at Sha Tin on Monday morning in readiness for the Sprint Showdown on HKJC Champions Day. 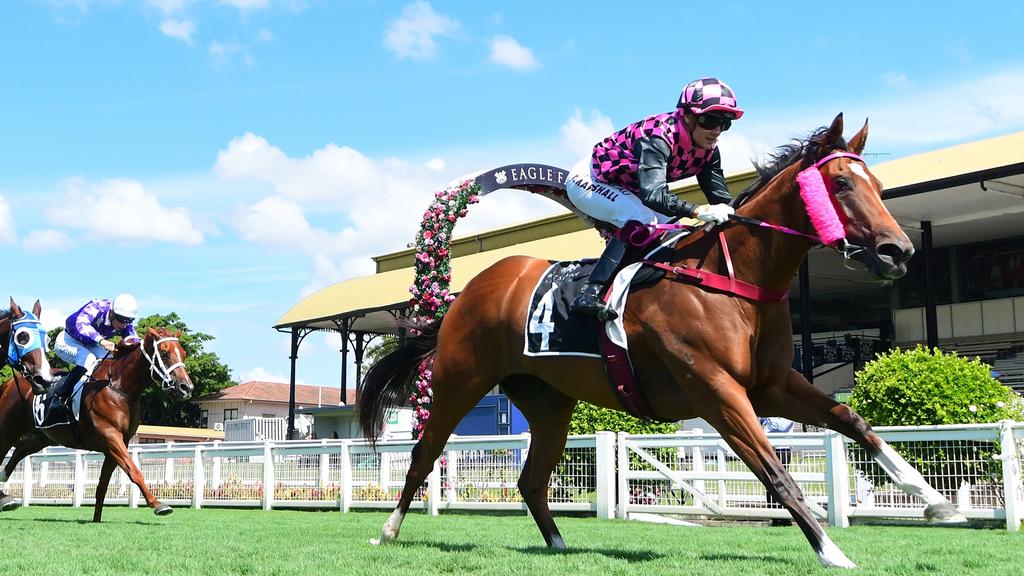