Trainer Richard Gibson reached a career-high with Akeed Mofeed in the G1 Hong Kong Cup earlier this month and he unveiled another potential top-liner at Sha Tin on Saturday.

His Henny Hughes gelding Great Charm slammed a talented field of sprinters in the Ho Sheung Heung Hcp (1400m).  “He’s always shown ability and is putting it all together now,” said Gibson.  “We put the cheek pieces on and that’s helped him concentrate.”

Great Charm is son of former Rangeview Stud sire Henny Hughes and he also impressed jockey Olivier Doleuze.  “He’s been a pet project of mine,” Doleuze admitted.  “He’s a horse I’ve always liked a lot and he has improved with more time but is still six months away.  He keeps waiting for the other horses.”

Great Charm (4g Henny Hughes – Crystal Moon by Danewin) is the penultimate foal of his dam who died three months after delivering a Caught Courting colt in September 2012.

Rangeview Stud sold Henny Hughes to Japan this year and there are still two of his crops at the Bullsbrook property that will be catalogued for the 2015 and 2016 Perth Magic Millions.

In the meantime, Rangeview Stud has entered two yearlings by Henny Hughes accessed from the Eastern States for the 2014 Perth Magic Millions in February.

Lot 396 is a colt ex Template (Thunder Gulch).  Dam won 4 races in Sydney and has foaled two winners from two to race. 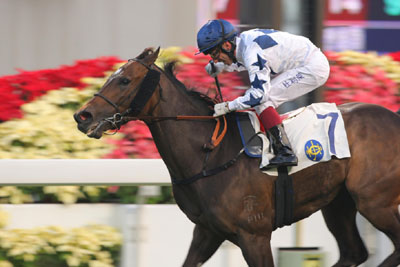