Their resident sire Master of Design was also busy with 4 winners in as many days in Australia and New Zealand.

“The half-sister to Le Romain is a filly by Exosphere,” Laurie McCarthy said.  “We board their dam (Mignard) for Mark & Tony Carusi and I will take her back to Darley later this month.  She’s booked into Brazen Beau.”

The Carusi brothers have raced Le Romain to Group 1 victories at Flemington and Randwick but he was spelled for the autumn carnivals after pulling up with a ‘dirty throat’ in the G1 Makybe Diva Stakes in September.

Another of the 50 plus foals that have arrived at Greta West this season is the half-brother to Perth winner Disruptive and the Fighting Sun yearling that made $115,000 at the Inglis Premier Sale in March.

“He’s a big, strapping colt and we will send their dam Lady Phoebe (Sravinsky) to Reward For Effort this season,” McCarthy added.  “The mare has a lovely Puissance De Lune filly here and the Fighting Sun colt pleased Gerald Ryan before going shinny last month.”

Sun Bloodstock bought the colt at Oaklands and he has been named Reptilian Rider.

“He got shuffled back after the start so it was a good effort to keep fighting through the line,” trainer Steven Cole explained.  “He will run again at Pukekohe on November 25 and should qualify for the Dunstan Championship Final at Ellerslie on Boxing Day.”

Darren Weir unearthed a promising Master Of Design debutant with Knight Commander a runaway maiden winner at Kyneton on Wednesday.  His British-bred dam Sharp Awakening (Selkirk) is a half-sister to successful sire No Excuse Needed.

Master Of Design, who stands for a $5,500 (inc gst) service fee at Greta West, doubled up on Friday with lightly-raced, short-priced favourites No Veecat (Moe) and Gaudi (Cranbourne).

No Veecat won like an odds-on pop should for trainer Greg Eurell after a first-up placing at Ballarat last month.  She’s from a daughter of Lindsay Park mare Amah Dramas (Barathea) who won up to 1500m at Sandown.

“That was convincing and it’s good to get that win on the board early,” jockey Damien Thornton said.  “She came off the bit around the corner but when I gave her a smack she picked up and really hit the line.  She has the scope to be a city filly and will keep progressing up to a mile.”

Trainers Mat Ellerton & Simon Zahra maintained their own winning run with Gaudi at Cranbourne on Friday evening.  “He has the best attitude and has been going terrific in the mornings,” jockey Chris Symons said.  “We got away with some easy sectionals and then I upped the ante at the 600m.  They never got near him after that and I think he will get over a mile at least.”

Gaudi is from NZ-bred mare Lovely Rita (Deputy Governor) and was a $60,000 buy at the 2016 Inglis Melbourne Premier.  EZ Racing is also training her Master Of Design 2yo sister named Georgie for Barrie and Midge Griffiths. 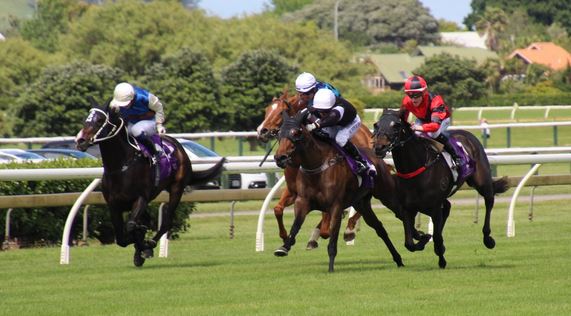