Lindsey Smith’s extraordinary winning run in Victoria continued on Saturday thanks to a brave win by Tuvalu in the David Bourke Hcp (1630m) at Flemington.

Tuvalu (Kermadec) and French-bred grey gelding Visinari (Dark Angel) staged a stirring two-horse war down the long straight at Headquarters.  Jockey Jarrod Todd had his hands full as the winner kept laying-in under pressure before eventually edging ahead by a long neck.

A late bloomer, Tuvalu has won 6 races in 10 starts and been runner-up on the other four occasions.  “We’ve always thought he’s a good horse and he’s yet to run a bad race,” stable foreman Shane Jackson said.  “He went down narrowly here last time so we kept the work up to him and he got the job done in a competitive race.”

He’s owned in partnership by Chris Wells and Bill Andrews and they also raced Scales Of Justice (Not A Single Doubt) to a Group 1 victory with Smith in the 2016 Railway Stakes at Ascot.

Saturday’s win ensured Tuvalu has qualified for the LR Winter Championships (1600m) at Flemington on July 2.

Smith has richer targets in mind for former Perth galloper Triple Missile following a last-start victory in the $150,000 Golden Topaz (1200m) at Swan Hill on June 10.

The Balmoral Park homebred settled near the rear of the field but a patient ride from Craig Newitt ensured the four-year-old had cover before unleashing a devastating turn of foot to win comfortably by two lengths.

“He drew the cemetery but that didn’t bother us too much because he gets back and has got a powerful finish,” Smith said.  “At the risk of going the early crow, the (G1) Oakleigh Plate is the race I will earmark for him next season.”

Newitt was just as impressed with the son of Smart Missile who improved his strike-rate to 6 wins in 12 starts for earnings over $350,000.   “He’s a proper horse and his acceleration is just about as good as I’ve ridden.  If he draws a gate he can possie up and, if left alone, can go a long way in those big sprints.”

Triple Missile arrived at Smith’s Warrnambool stables from his WA satellite operation earlier this year following a brilliant victory at Ascot in November.

Triple Latte was imported to Australia in 2011 and her most recent foals are a yearling colt by Proart and a filly foal by War Chant (USA). 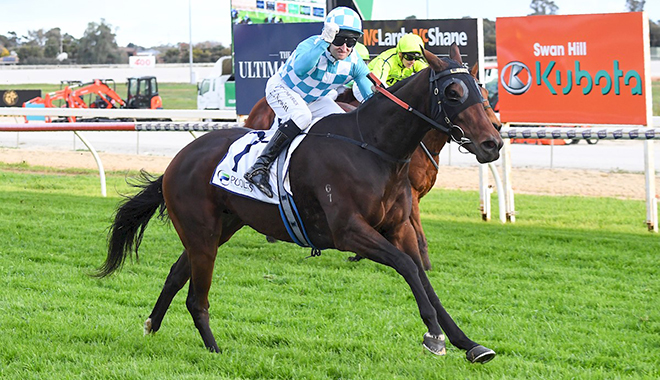