Trainer Stephen Gray has the enviable task of setting Group 1 goals for his emerging stayer Hard Too Think in Singapore.

Gray was looking at the options after his 4yo son of Vinery sire All Too Hard scored a resounding victory over 2000 metres at Kranji on Saturday.  The Singapore Derby (Gr.1, 1800m) on July 25 is an obvious target while, long-term, there’s the Singapore Gold Cup (Gr.1, 2000m) in November.

Hard Too Think was winning for the third time in 9 starts for a syndicate of owners from Singapore, New Zealand and Australia.  He’s part of a 72% winning strike-rate for All Too Hard in Singapore.

“I bought him at the Gold Coast and sent him to New Zealand,” Gray recalled.  “I syndicated him as a yearling although there weren’t many people on board at first.  I like horses who try hard and I have really looked him.  He’s genuine and is going through the grades.  He’s by All Too Hard and is bred to stay on the dam side.

“He could be my Gold Cup horse in November and, as for the Derby, he needs to earn a few more points to get in.  There’s a Class 3 race over 1800m coming up and that would help him qualify.  I’m not sure how strong the Derby will be this year but he will like a wet track even better.”

Hard Too Think was bred by Gerry Harvey and sold through the Baramul Stud draft for $45,000 at the 2018 Magic Millions National Yearling Sale.  His dam Mnemonic (Hussonet) foaled an All Too Hard colt in November and she was a late cover for Star Turn in December.

There are 16 lots by All Too Hard catalogued for the Magic Millions National Yearling Sale commencing on Tuesday.  Baramul has a half-dozen including Lot 1575, the half-brother to Group 3 performer Baby Wong (Press Statement). 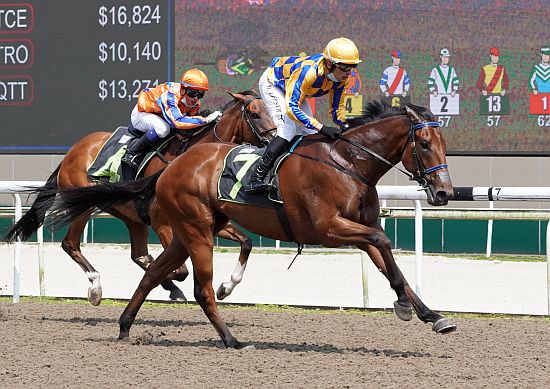