Vinery Stud handed out cigars on behalf of Press Statement and Headwater a couple of months before the arrival of their first foals in the Hunter Valley.

Vinery and breeders who booked in were delighted when mares carrying positives to the newcomers were popular at the Magic Millions National Sale in May.

Thinking Of You (Thorn Park) was offered in foal to Press Statement and made $325,000 to the bid of Boomer Bloodstock’s Craig Rounsefell.  “She was placed behind First Seal & Winx in the (G1) Flight Stakes and ticked all the boxes,” Rounsefell said.  “She’s carrying a nice covering by a commercial stallion in Press Statement so everything matched up.”

Aquis Farm also targeted Press Statement when paying $200,000 for Incredulous (Keep the Faith) on the Gold Coast.  The Bendigo winner will deliver one of Press Statement’s first foals from a September 5 serve last year.

Press Statement was the only colt of his generation to win at Group 1 level as a 2yo and 3yo.  His sire Hinchinbrook was Australian first-season champion in 2014-15 and came within $20k of third-season honours in 2016-17.

Trainer Chris Waller rated Press Statement “a better 2yo than Zoustar & Brazen Beau” and he will stand for a $22,000 (inc gst) fee this year.

Mares in foal to Headwater were also in demand at the Magic Millions National Sale off a $16,500 service fee last year.

Sunshine Coast winner Seonia (Sebring) transferred to Rich Hill Stud in NZ shortly after changing hands for $130,000.  She is a half-sister to Adelaide stakes winner Japhils.

Royal Schilling (Artie Schiller) and Swaane (Charge Forward) were other young mares who made six-figures off early covers last year.

Headwater (Exceed And Excel) was a Group 2 winner of the Silver Slipper Stakes and was equally potent as a 3yo downing G1 Newmarket Hcp winner The Quarterback at stakes level at Flemington.

He was fully subscribed first-up at Vinery and is assured of another big book at $16,500 again this year. 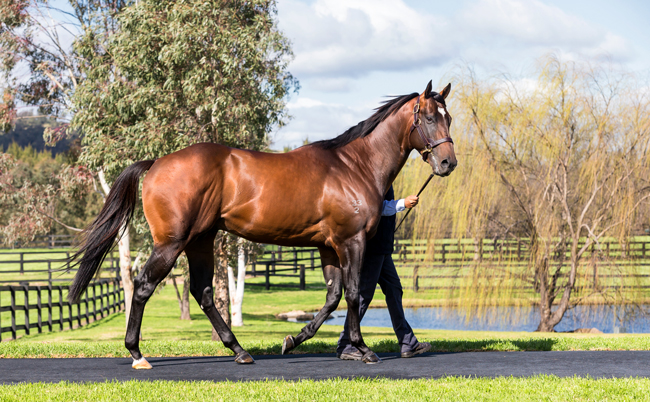