Hoi An has been cursed by bad barriers but a wide gate didn’t prevent her powering home to a half-length victory in the G3 WA Sires’ Produce Stakes (1400m) on Saturday.

“How cool is that!” Hoi An’s owner-breeder Craig Thompson beamed.  “She drew 17 in the Karrakatta and didn’t have any luck.  Then we drew 14 today and I thought she was no chance.  But Shaun (O’Donnell) is Mr Cool.  He’s the go-to man and has come up trumps.

“I wanted to spell her after the barrier but Roy told me to wait and see if there were any scratchings.  I gotta say, I’m pretty happy she didn’t go to the paddock.”

Thompson and his wife Rose own Mt Hallowell Stud in Denmark and stood Sebring stallion Longma for just two seasons before he died following foot surgery.  He sired the Sires’ winner from M’lady Hallowell (Wanted) who is out of a half-sister to USA Group 1 winner Spinning Round (Dixieland Band)

“When we drew the River, Craig wanted to go forward but I told Shaun to stick to our plan,” Rogers recounted.  “Ride her for luck from the back and I would take any flack.  He necked her out of the gates and then followed Ex Sport Man.

“She’s a beautiful filly to train and has a huge heart.  There’s not much of her but she can be a real character.”

O’Donnell was winning his first WA Sires’.  “You need luck and it helps being on a machine like her,” he said.  “I couldn’t believe we got on the back of the favourite and I was just waiting to produce her on the outside.

“She went bang and was just too good.”

Hoi An had won on debut at Bunbury on Australia Day and added a Group 3 scalp in the Gimcrack Stakes before a forgettable run in the Karrakatta.  She will return for a spring campaign targeting the G3 Champion Fillies’ Stakes and G2 WA Guineas. 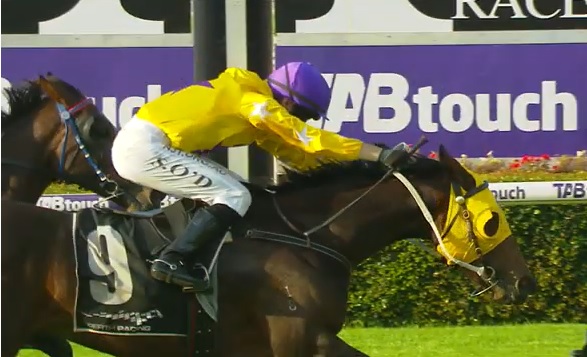