Universal Ruler has built a solid platform to rise up the WA stallion ranks this season with horses like Fuhrer and We’ve Got Dreams.

They returned to Belmont on Saturday with a winning double for trainers Darren McAuliffe and Michael Lane.  Together, they have won 8 of their last 13 starts.

The 4yo pair were part of a successful run for Universal Ruler at the back-end of 2019-20.  The Scenic Lodge resident sired the winners of 14 races in July to finish fourth on the WA sires’ premiership.

McAuliffe and his Impressive Racing partner Kevin Berry raced Universal Ruler and they have rolled out 29 individual winners of 104 races by him since Rebel King cut the ribbons at Belmont in May 2014.

“Fuhrer is straightforward to train and I told Mitch (Pateman) to lift the tempo from the 700m to take the others out of their comfort zone,” McAuliffe said after the Happy Birthday Robyn Hcp (1600m).  “He’s heading in the right direction but there are no special plans.  We will look at the calendar on Tuesday and go again later this month.”

A winner of the WA Cup (1600m) at Northam in June, Fuhrer is the fourth winner from as many to race from Furocitee (Dante’s Fury).  The Impressive Racing mare has a 2yo filly and yearling filly by Universal Ruler and was bred back to him last October.

We’ve Got Dreams is building a tip-top strike-rate for Universal Ruler and jockey Kyra Yuill who is unbeaten in six starts on the Bunbury flyer.

“Kyra knows how to get the best out of her,” Lane said following the Seppelt Wines Hcp (1000m).  “She hangs on and holds her up for as long as possible.  She was being chased down by a good horse like Money Matters but I was confident with Kyra back on board today.

“We’ve Got Dreams has a tough constitution and I had to give her an extra gallop this week.  She is six runs into this prep and is still putting on weight!”

Scenic Lodge stands Universal Ruler and Snippetson for $6,600 this year with Dash For Cash available at $2,750.  All fees (inc GST). 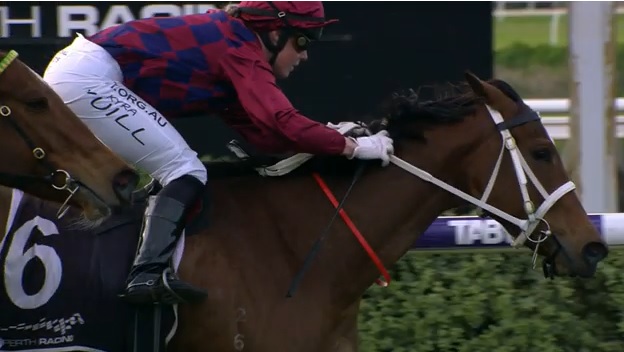