Frolic (Husson) accelerated from last at the top of the straight to overhaul front-runner Sweet Deal (Casino Prince) by over a length for trainer Michael Freedman.  They streeted the rest of the field by more than 5 lengths.

Freeman returned to Sydney last year after a stint in Singapore and the majority of his team are two year-olds.  He won the G3 Widden Stakes at Rosehill with Teaspoon last month and her stablemate was just as impressive at Randwick.

“I came here with confidence, despite the wide draw,” Freedman admitted.  “It’s a big thrill and I think she can win better races as we go deeper into autumn.  She’s got a great turn of foot and will be better suited getting out to 1400m and a mile.”

Frolic is bred to excel as a juvenile.  Husson was a Champion 2YO in Argentina and her dam Leveller (Redoute’s Choice) was also a black-type winner at two in the G3 Thoroughbred Breeders Stakes at Flemington.

Tommy Berry is keen to stay aboard Frolic who earned $147,500 on Monday.  “I told Michael she was a bit keen with winkers last time at Canterbury.  She switched off today and that finishing sprint was electrifying.”

Husson (Arg) has another very promising Inglis Classic Sale graduate in Hong Kong named Nothingilikemore.  He is trained by John Size and was a dominant debut winner at Sha Tin last month. 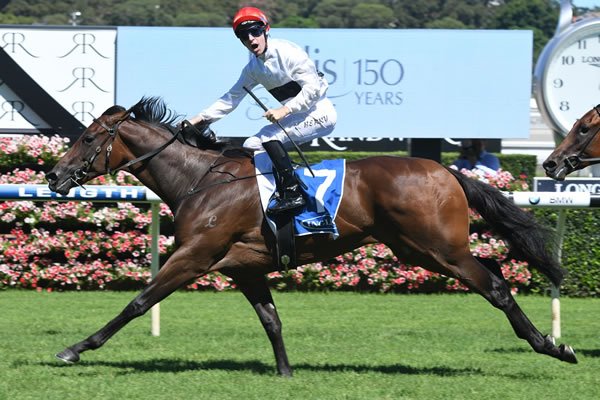