More Than Ready sired his 19th Group 1 winner in the Queensland Derby (2400m) on Saturday and there could be more coming over the horizon at Royal Ascot and Chantilly.

The Eagle Farm victory added Eagle Way’s name to the Vinery champion’s honour-roll – right below No.18 Prized Icon who won the G1 Champagne Stakes at Randwick in April.

Eagle Way had put the writing on the wall before the classic and so has untapped filly Nemoralia in the lead-up to the G1 Coronation Stakes on Friday.  The Aga Khan’s homebred Deremah is also a live chance in the G1 French Oaks next Sunday.

The More Than Ready momentum began on Thursday with a stakes winner and two new maiden winners in the USA.

His classy sprinter Zindaya won the LR Intercontinental Stakes (1400m) for the second year in a row at Belmont Park.  The five year-old mare started in the red and scored by more than three lengths for new owners Five Racing Thoroughbreds.

“She’s been a work in progress and is switching off nicely now,” trainer Chad Brown said.  “We have plans to stretch her out down the road.”

The win had added meaning to Brown.  He was assistant to the late, great trainer Bobby Frankel when stable star Intercontinental won the 2005 Breeders’ Cup Filly and Mare Turf (2000m) at Belmont.

Zindaya (5m More Than Ready – Aristocratic Lady by Kris S.) is a younger half-sister to Western Aristocrat (Mr. Greeley) who was G1 Jamaica Hcp winner for Vinery Stables at Belmont Park in 2011.

She initially changed hands after passing-in for $145,000 at the 2012 Keeneland September yearling sale.  Vinery’s Kentucky breeding division agreed to terms with Regis Farm owner Nat Rea and he on-sold her at Keeneland for $550,000 after last year’s Intercontinental.

More Than Ready backed up the Belmont result with two maiden winners at Santa Anita on Thursday.  His 2yo filly Miss Southern Miss closed from midfield for a three length victory on debut over 1000m.  She races for Kentucky breeder Peter Cantrel and is a daughter of multiple stakes winner Miss Atlantic City (Stormy Atlantic).

His 3yo filly Proud ‘N’ Ready broke through over a mile on turf for trainer Peter Eurton.  She’s the first foal of Holdontoyourdream (Proud Citizen) who was Group 2 placed in the 2009 Comely Stakes at Aqueduct.

Friday’s Singapore card kicked off with another odds-on winner by More Than Ready.

Brother Wind never gave favourite punters any cause for concern in the Initiation Stakes (1400m) at Kranji.  “I rode him like he was the best horse in the race,” jockey Vlad Duric stated.  “He jumped well from a wide gate and I got him in a good position.  He’s still a big baby but has plenty of quality and will be even better over more ground.”

More Than Ready sired Brother Wind from Singspiel mare Paulini who won an Inglis 2YO Classic at Warwick Farm in 2005.  He cost $220,000 at the 2014 Inglis Sydney Easter yearling sale and was unplaced in Sydney and Melbourne before shipping to Singapore trainer Steven Burridge. 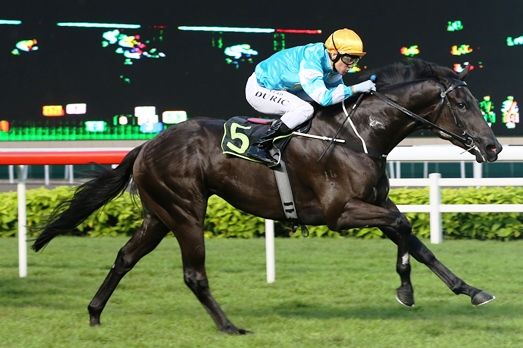