Headwater fired up for the Magic Millions Carnival with four winners in four States over the festive season.

The Vinery sire’s top-class 3yo filly Jamaea can put the icing on the cake in the Magic Millions Guineas (RL, 1400m) on January 15. She remains a solid $6 favourite for the $2million feature after impressing trainer Rob Price with an eye-catching trial at the Gold Coast on Tuesday morning.

The multiple Group 2 winner will be the focal point for vendors of the 11 Headwaters yearlings at the Magic Millions Yearling Sale and Price has no regrets scratching her from the Nudgee Stakes (LR, 1200m) at Doomben last weekend when the track deteriorated to a Heavy 10.

“The track was pretty chopped up and Tommy (Berry) was on the same page,” he said.  “It would have done Jamaea more damage than good.  She only had three weeks off after the spring carnival and we’re happy to send her over 1400m first-up in the Guineas.  It’s been a bit frustrating but the way she finished off that trial proved she’s going extra good.”

Headwater had kicked off his holiday quartet when Perth filly Heavenly Waters cruised home to claim the Amelia Park Lodge (1000m) at Ascot.  She’s all heart and the 3kg allowance for stand-in jockey Beau Banovic-Edwards brought her right into the race with 59kg.

Heavenly Waters earned top-weight after a debut season that saw her win the Crystal Slipper Stakes (1100m) and finish a close second to Ex Sport Man in the WA Magic Millions 2YO Classic (RL, 1200m)

Trainer Roy Rogers engaged Banovic-Edwards after his stable apprentice Maddy Cornick was sidelined with a fractured pelvis.  She got away with a some comfy sectionals in running and then sooled the 3yo filly to a three-length lead at the furlong.  “Roy said to just rate her in front and Maddy also told me she could be a bit touchy out of the gates,” Banovic-Edwards explained.  “I was confident on the corner and she gave me a good kick.”

Headwater doubled up on Boxing Day with debut winners Aitch Two Oh (Morphettville) and Manhood (Gold Coast) gave a juvenile field no excuses with an explosive four-length victory in the Adelaide Galvanising Hcp (1050m).  The 2yo filly was a Late-Mail Special and firmed into a $3 favourite despite no exposed form.  “She set the scene jumping quickly to find the lead,” trainer Richard Jolly said.  “She just kept going and there’s plenty more to come with this filly.”

Baramul Stud sold Aitch Two Oh for $65,000 at the 2021 Adelaide Magic Millions.  Her dam Very Dogmatic (Swiss Ace) is a full-sister to Mywayorthehighway (GCTC Vo Rogue Plate (Gr.3, 1200m) and she has a yearling colt by Press Statement and a filly foal by All Too Hard.

Manhood was also backed into an odds-on favourite and trainer Michael Costa described his first-up win in the Sky Racing Plate (1100m) as nothing more than a track gallop.  “I got him for $35,000 at the 2020 Inglis Classic Sale,” Costa recalled following the front-running result on the Gold Coast.  “He’s a beautiful colt and it’s turning out to be a great buy.

“He won a trial here in January but had a setback and we had to be patient.  It was like having a Ferrari parked in the garage!”

Manhood has opened a $2 favourite for the Aquis QTIS 3yo Hcp (1200m) at the Gold Coast this Saturday.  He’s the first foal of My Miss Pedrille (Lonhro) who is a full-sister to ATC Chelmsford Stakes Gr.2 winner O’Lonhro.

Belaqua Belle filled out the fourth win for Headwater at Mornington on New Year’s Day.  The 4yo Vinery graduate made amends for a last start failure as favourite when reeling in the leaders in the Catanach’s Jewellers Plate (1000m).

Racing for just the third time on her home track for trainer Tony Noonan, Belaqua Belle made $25,000 from Vinery (as agent) at the 2019 Inglis Classic Yearling Sale.  Her dam Belscenica (Scenic) was Group 2-placed at Moonee Valley and has already thrown All Too Hard winners Prism and Mister Dynamo. 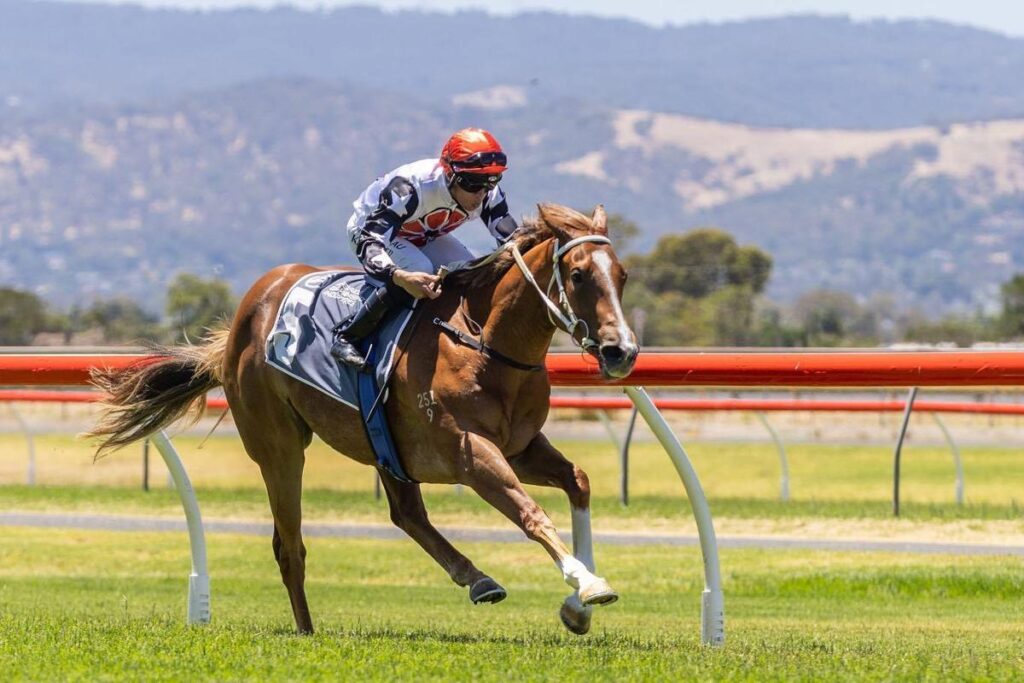