Vinery stallions will play a big hand in the juvenile division again this season after they dominated morning work-outs at Warwick Farm on Monday.

More Than Ready produced several very impressive youngsters at the first official trials while Mossman and Testa Rossa dominated the breeze-up session ahead of the Magic Millions HIT Sale.

Gai Waterhouse trained two winners and two seconds at the trials by More Than Ready starting with Sugar Rush (ex Sugar Babe by Exceed and Excel).  A $600,000 graduate of the 2012 Gold Coast Magic Millions, she will be one of the favourites for the LR Gimcrack Stakes after cruising home by more than two lengths.  Her dam was a Caulfield stakes winner on debut and trained on to capture the G3 McNeil Stakes at three. 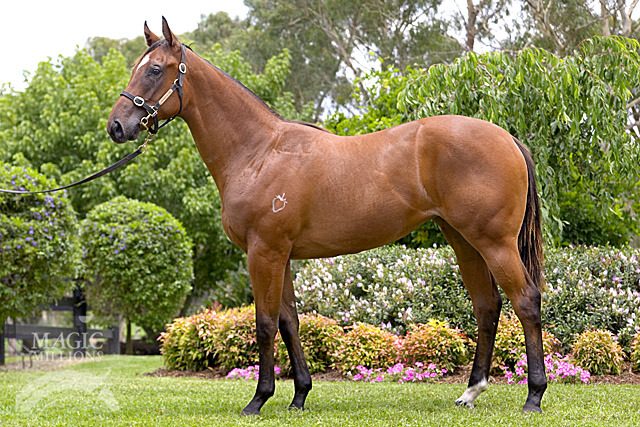 Her stablemate War (ex Deedra by Zabeel) will be in commission for the Breeders’ Plate on the strength of his half-length win.  He was a $500,000 buy at the 2012 Inglis Easter Sale and is from a half-sister to the dam of More Than Ready’s champion mare More Joyous.

Waterhouse trained fillies Most Joyful and Sammy’s Girl were just as impressive despite finishing second in their 850m trials on Monday morning.

Most Joyful (ex Sunday Joy by Sunday Silence) is from the same family as War being a sister to More Joyous.  Sammy’s Girl (ex Samantha Miss by Redoute’s Choice) is the first foal of a G1 Victorian Oaks winner.

Mossman weighed in with a winner of his own when Harry Hotspur (ex Snohalo by Flying Spur) scored a two length victory for trainer Kim Waugh.  He is closely related to G1 winning mare St. Clemens Belle (Don’t Say Halo).

Following the official trials, Magic Millions conducted its third batch of breeze-ups prior to the Horses in Training Sale at the Gold Coast on October 31 and November 1.  They followed previous HIT sessions at Gold Coast (Sept 17) and Seymour (Sept 19).

The Mossman – High Honour colt (Lot 163) was the fastest at 10.92s.  He is a half-brother to Melbourne stakes winner My Middi and will be offered by Baramul Stud.

Testa Rossa’s colt from Pure Beauty (Lot 278) is also from Baramul and he clocked 11.01s.  His dam won at Flemington and she is a half-sister to Randwick G3 winner Carnegie House.

The other Testa Rossa in the Top 5 could have a pedigree update before the HIT Sale.  His colt from Encosta de Lago mare Megara (Lot 221) is related to star sprinter Atomic Force who has joined the Mick Price stable for the Melbourne spring carnival.