Michael Mehegan has several options for front-running mare Prussian Vixen after she looked right at home in stakes company at Caulfield on Saturday.

Making her black-type debut in the Group 3 Bellmaine Stakes (1200m), she was rated perfectly by Jake Noonan before skipping clear in the straight to hold off Silent Sedition and Ameristralia.

Mehegan is based at Mornington and one plan is a home-track attack on the Listed Hareeba Stakes (1200m) in March.  “She will go right up in the ratings so we will sit down and have a look at the calendar before mapping out a program,” Mehegan said.  “There are some other nice stakes races against fillies and mares in Sydney and Adelaide.”

Prussian Vixen has won 6 races in 21 starts for prizemoney of $294,440 including $47,600 in bonuses courtesy of VOBIS.  “She’s very tough and is reaching her full potential this prep,” he explained.  “She kept tying up and had a joint problems last year so we gave her a good spell and there’s no problems now.”

Mehegan bred her by using Greta West Stud sire King Of Prussia over Miss Eileen (Lion Hunter) who won races at Wodonga and Tatura sporting his lilac and white colours.  Prussian Vixen was her first foal and he also has her unraced half-brother Demon Hunter (Keep The Faith).

“She was positive to King Of Prussia again last year but had a bad bout of colic and had to be put down,” Mehegan said.  “Prussian Vixen isn’t the best bred mare on the bottom-half of her pedigree but the black-type has really bumped up her residual value and we will keep her for stud.”

King Of Prussia (Anabaa) retired to the Greta West Stud roster in 2003 and he has a full-brother to Adelaide stakes winner Justify That (Lot 735) entered for the Inglis Premier Sale on Wednesday, March 1. 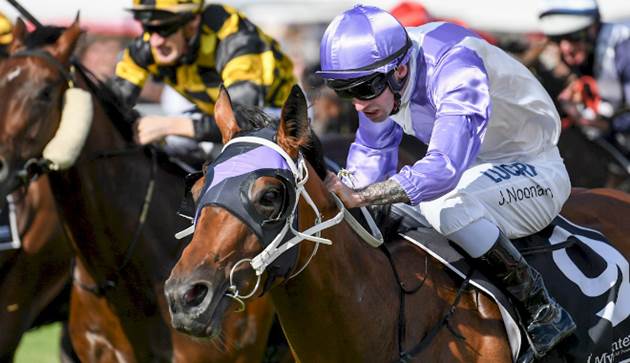