Sent out the favourite after a stakes win and placing from two runs at Flemington, Madeenaty made history when she led home her rivals in the rich and highly rated event.

The filly, a daughter of Exceed and Excel, is the first Victorian trained horse to win the Wyong Classic and jockey Mark Zahra, the first from the same state to win.

A brilliant winner of the Maribyrnong Trial Stakes at Flemington in October, Madeenaty was one of the star fillies of January’s 2016 Gold Coast Yearling Sale.

Offered at the sale by Segenhoe Stud, the strongly built filly caught the eye of many good judges before being knocked down to Angus Gold on behalf of Shadwell Australasia for $775,000.

Prepared by David and Ben Hayes and Tom Dabernig, Madeenaty will now head to Queensland without another run.  “We’ve always had an opinion of her and it was good to see her do it today,” co-trainer Ben Hayes said.  “She’s got great gate speed and that’s a good asset for a two-year-old.”

Both placegetters ran brilliantly and their task is now to make the cut off to the field of 16 for the feature $2 million race on January 14.

Sent out the $1.40 elect with bookmakers, the well bred mare cruised home to beat Madotti by a length and a half, with Dam Ready a head back third.

Trainer Bjorn Baker was delighted with the performance and described winning rider Brenton Avdulla as one of the “most inform jockeys in the universe” following the win.

The win of Egyptian Symbol was celebrated by the team from Cressfield.  Not only does she race for them, they will offer a Zoustar half brother as Lot 290 at January’s 2017 Gold Coast Yearling Sale. 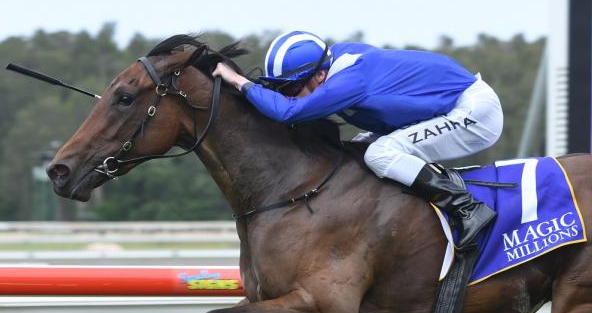