Master Of Design 3yo Megamea showed a massive will-to-win when racing first-up at Sale last Sunday.

Part-owned by Cranbourne trainer Udyta Clarke, she broke though following placings at Benalla and Moe during an initial prep in October. “She has promised so much but has been very green,” Clarke claimed after the Thank You Bushfire Heroes Maiden (1210m). “It’s a real adrenaline rush to see her do that.”

Megamea (3f Master Of Design – Haumea by Encosta De Lago) tracked the leader Kimberley Spirit and angled off her heels only to be swamped by Seemingly Discreet at the top of the straight. The favourite raced clear but Clarke’s filly wasn’t done with.

“She took a while to build up and then powered to the line,” jockey Ben Allen reported. “The favourite was wayward once she got to the front and probably threw the race away. But it was still a nice win by my filly and she will only get further.”

Clarke and Don Allen bought Megamea as a foal at the 2017 Inglis Great Southern Weanling Sale. “She’s got a lovely pedigree and I liked the look of her going through the ring at Oaklands,” Clark added. “Adam Sangster bred her and he rang me up a couple of weeks later and said she was worth a lot more being related to Bonneval.”

Bonneval (NZ) crossed the Tasman a few months later to win the G2 Feehan Stakes at Moonee Valley and G1 Underwood Stakes at Flemington. The Melbourne spring carnival double was instrumental in her clinching honours as NZ Horse of the Year.

There are more wins in store for Megamea and she has been nominated for a Super VOBIS 3YO Fillies Hcp (1300m) at Sandown Lakeside next Wednesday (January 22). “She might make a nice broodmare later on,” Clarke admitted. “But I’m too old to be having too many at stud now!”

Megamea (pictured as a foal) has a yearling half-brother by Toronado (Ire) catalogued as Lot 639 by Highview Stud for the NZB Karaka Yearling Sale starting on January 26.

Master Of Design (Redoute’s Choice) stands at Greta West Stud and he can strike at Group 1 level with The Mitigator in the Thornden Mile at Trentham this Saturday. His Mornington-based sprinter Remastered is in action at Flemington a few hours later following a victory at headquarters on New Year’s Day. 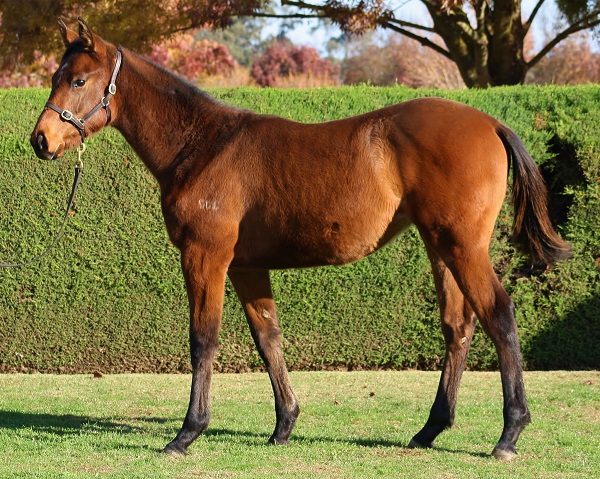 MEGAMEA – Pictured as a foal