More Than Ready’s champion mare Rushing Fall has returned to her favourite track to rewrite the record books in the Jenny Wiley Stakes Gr.1 at Keeneland.

Saturday’s three-quarter length victory over 1700m on turf was timed at 1:39.02s.  That shattered the long-standing record of 1:40.30s set by Canadian Hall of Famer Quiet Resolve in 2000.

She has moved into second place among the 24 Group 1 winners by More Than Ready.  The Vinery legend’s elite roll-call is headed by More Joyous (8) from Rushing Fall (5), Roy H (4) and Uni (3).

Rushing Fall also became only the third horse of the modern era to win Group 1 races at two, three, four and five in the USA.  The second Jenny Wiley improved her Keeneland strike-rate to 5 black-type wins which is only bettered by Horse of the Year Wise Dan (7).

“Everyone wishes for a horse like this,” said owner Bob Edwards.  “This is just phenomenal.  I’m still shaking.  The adrenaline spike is still there, even when you’re watching at home.”

Typically a front-runner, Rushing Fall showed a different dimension on Saturday flanking pacesetter Jolie Olimpica (Brz) before asserting her superiority in the straight.  “She doesn’t have to be on the lead,” regular jockey Javier Castellano said.  “The way she did it is amazing and once she got ahead, she wasn’t letting up.”

Under Chad Brown’s care, Rushing Fall has won 10 times in 13 starts for earnings over $2.27million.  Bred by Fred Hertrich and John Fielding, she was a $320,000 purchase at the 2016 Fasig-Tipton Saratoga Yearling Sale.

Her dam Autumnal (Forestry) foaled a full brother to Rushing Fall earlier this year in Kentucky.

Brown and Edwards have yet to decide what race to target when the Breeders’ Cup Championships comes to Keeneland in November.

Rushing Fall won the 2017 Breeders’ Cup Juvenile Fillies Turf at Del Mar and she can stick to her own division in the BC Filly & Mare Turf (1900m).  Or do they keep her at a trip she relishes while taking on males in the BC Mile?

On Sunday at Keeneland, More Than Ready’s 3yo colt Street Ready just missed landing his first black-type in the Transylvania Stakes Gr.3 over 1700m.  In a desperate photo-finish, he was nosed out by Field Pass with Fancyliquor a close-up third.

Street Ready won a juvenile maiden at Churchill Downs last September after graduating from the Keeneland Yearling Sale for $240,000 in September 2018.  His dam Sense to Compete (Street Sense) was stakes-placed at Monmouth Park and is a half-sister to Lady Digby (All Along Stakes Gr.3). 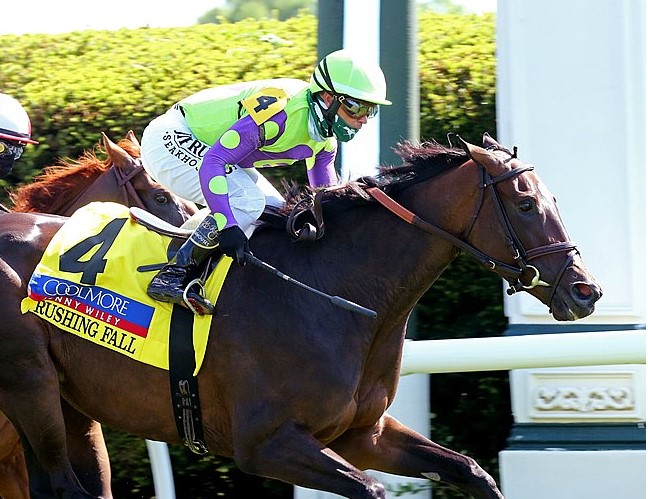