All roads lead to Moonee Valley this weekend where Winx can create history in what’s shaping up as an epic renewal of the Cox Plate Gr.1.

The MVRC offers more than $9 million in prizemoney across 18 races on Friday night and Saturday afternoon at the world-renowned carnival.

More Than Ready’s 2yo colt Reddisun makes his debut in the first of the support races on Saturday in the $500,000 Inglis Banner (1000m).  Trained by Max Hinton at Mornington, he was catalogued for the Inglis Melbourne Premier in March and is part-owned by Destiny Racing.

Reddisun was placed in a Cranbourne trial on October 8 and has the pedigree to match the precocity of any other newcomer in a field of unexposed youngsters.  His dam Malasun (Red Ransom) won a Blue Diamond Preview LR and her half-brother Stokehouse (Anabaa) was a front-running winner of the Griffiths Coffee 2YO Cup at Caulfield.

More Than Ready also has More Than Exceed (Australia Stakes Gr.3) and Prized Icon (Crystal Mile Gr.2) engaged on Saturday as well as Sally’s Day, another interesting early-season 2yo at Canterbury on Friday evening.

First-starter Sally’s Day races for Strawberry Hill Stud owner John Singleton and is coming off a Warwick Farm trial win last Friday.  She is a Vinery-bred full-sister to Brisbane sprinter Better Than Ready who joined the list of winning sire-sons by More Than Ready when his colt The Odyssey scored at Doomben last Saturday.

The Vinery legend continues to confound the rule-book in the Hunter Valley this season. “We have 177 foals on farm although not all of them were born here,” Vinery’s Marketing Coordinator Racheal Finlayson said on Wednesday.  “More Than Ready is still our most fertile stallion – just in front of Star Turn.  He’s a freak!”

More Than Ready is gearing up for another big two days of racing for the Breeders’ Cup Championships at Churchill Downs next weekend, November 2 & 3.  His Group 1 winning colt Catholic Boy heads the 3yo division against all ages in the $6 million BC Classic Gr.1.

Trainer Jonathan Thomas was all smiles after Catholic Boy logged 62.60s for 1000m (pictured) under the Twin Spires last Sunday.  “Everything went really well,” Thomas said.  “He broke off kindly from the pony and really picked it up from there.

“It was more of an endurance-building work-out.  He ran two tough races over the summer winning the Belmont Derby and Travers Stakes so we didn’t really need anything too speedy.  This was probably the most major work prior to the Classic and we will likely come back with something easy next weekend.”

Catholic Boy had spiked a slight fever after floating in from New York a fortnight ago but Thomas maintains it was a minor setback.  “You really don’t want any hiccups, but in the grand scheme of things, he recovered very quickly.  He’s such a fit horse and we might have pumped the brakes and given him a couple easy days, anyway.”

The BC Classic will be the first start at Churchill Downs for the colt, whose nine career starts have come at six different tracks.  “Historically, he’s a horse that’s translated his form basically all over the country since he was two,” Thomas continued . “He’s intelligent and it only takes him a couple days to kind of soak everything in and relax.” 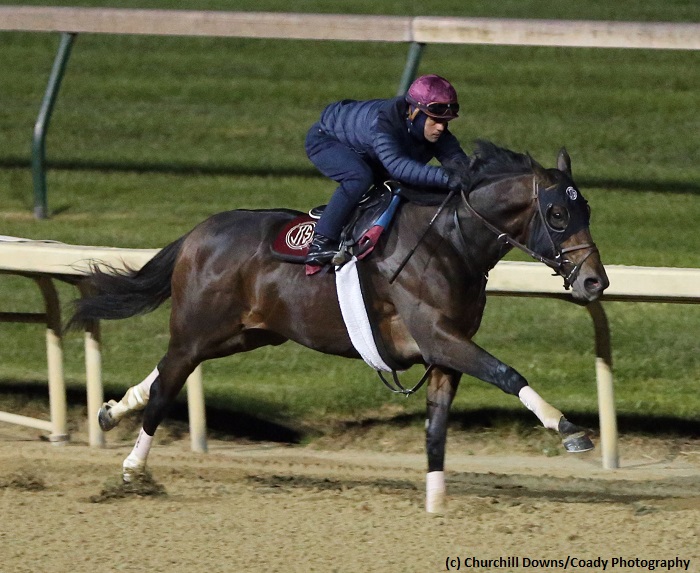