Casino Prince climaxed a big weekend at home and abroad when What’s New won the Singapore Silver Bowl LR at Kranji on Sunday.

What’s New became the 18th stakes winner for Vinery Stud’s high-volume winner-getter and trainer Cliff Brown has designs on more black type in the weeks ahead.  The Silver Bowl is the first-leg of the Singapore 4YO Challenge and she will stay in training for the Stewards’ Cup on June 30 and Singapore Derby on July 21.

“I was sure she would run enormous today,” Brown said as visiting Adelaide apprentice Raquel Clark brought the winner back to scale.  “She tries hard and is so genuine.  She was travelling the whole way and responded when the run presented.”

What’s New was bred by Vinery partner Greg Perry from English-bred mare Pussycat Dream (Oasis Dream).  The dam had won a Nottingham nursery at her only start before attracting a 40,000gns (AUD 76,510) bid from agent Paul Moroney at the 2011 Tattersalls HIT Sale.

Perry sent Pussycat Dream to NZ in foal to Casino Prince and Brown has taken a shine to her progeny at Karaka.  He also bought her Tavistock filly and El Roca colt at the last two NZB Yearling Sales.

Meanwhile, Casino Prince star Lim’s Cruiser has arrived in England for the Diamond Jubilee Stakes Gr.1 at Royal Ascot on June 22.  Trainer Stephen Gray reports his Singapore Horse of the Year handled the flight without any hiccups and ate and drank up after touching down on Saturday.

Baccarat Baby is another Casino Prince being set for a Group 1 on June 22.  She will be nominated for the $500,000 Tatt’s Tiara at Eagle Farm after finishing a close-up second in the Queensland Guineas Gr.2 last Saturday.

“She’s probably the best 3yo filly based up here and is as game as they come,” owner-breeder Peter Harris said.  “David (Vandyke) told me she pulled up well and we think she deserves a throw at the stumps.  She was beaten less than a length in the Flight Stakes at the Sydney spring carnival so won’t be out of her depth in a Group 1.”

Harris and fellow part-owner Matthew Irwin bred Baccarat Baby by using Casino Prince over Meerlust (Johannesburg).  She’s a direct descendant of illustrious North American broodmare Fanfreluche and her residual value will sky-rocket with another Group 1 on the pedigree page. 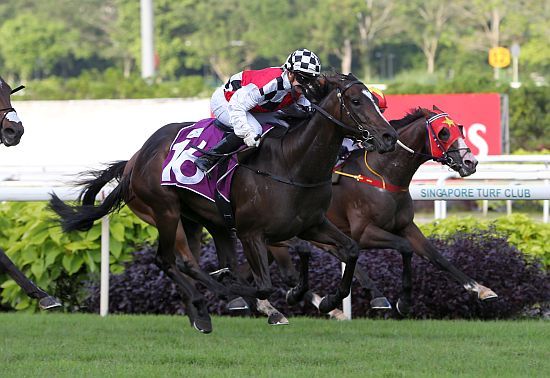