Press Statement sired a fifth winner in four days when Steel Win broke his duck in the Wong Cup (1200m) at Sha Tin on Sunday.

Steel Win (3g Press Statement – Lago Joy by Encosta De Lago) was pushed along by Joao Moreira passing the 600m pole and he stayed on strongly to deny the late challenges of Everyone’s Victory (Deep Field) and Fourawarrior (Darci Brahma).

“Coupled with the light weight and a good jockey, it was a winning combination,” trainer Mark Chang said.  The 59 year-old handler and owner Jimmy Tang Kwok Leung sourced Steel Win for $37,500 at the 2019 Magic Millions 2YO Sale.

Bred on the Victorian-NSW border by Reg Ryan, he was prepped by Tal Nolen at Benalla and then educated by Kacey Fogden at Aquis Farm before relocating off-shore in August 2020.  “He was a nice type and I bred Lago Joy back to Press Statement,” Ryan said.  “That colt made $65,000 at last year’s Classic Sale and he’s also heading to Hong Kong for a client of Upper Bloodstock”

That colt is now named Press Talk and he won a Wyong trial for Peter Robl in May.

Press Statement’s latest wave started with Toomuchtobear on Thursday.  The Chris Waller trainee impressed Damian Lane with a switched on attitude at Bendigo.  “I did a lot of work on him early doors and he’s always been a lovely type.  Learning how to use all that ability will be important when he goes to town.”

Lindsey Smith trained the second-leg of a Press Statement double on Friday with It’s Classified at Geelong.  “She was beaten by a good horse last time at Ballarat and looked the winner a long way out today,” he said.  “The jockey (Brett Prebble) was happy to sit three-wide.  It was the place to be with the rail out.”

It’s Classified races for leading syndicator Brad Spicer and he also sourced Press Statement’s SAJC Nitschke Stakes Gr.2 winner Incredulous Dream.  “It’s great to share this success with such a big stable supporter like Brad,” Smith added.  “He got her for $32,000 at the Melbourne Sale.”

The Storm In Me took Friday’s first-leg at a muddy Muswellbrook for local trainer Tim McIntosh.  Racing first-up since March, she settled down to win a grind in deep ground for part-owner Mary Jane Basson who also campaigned Queensland Derby Gr.1 winner Dark Dream.

I’m Speechless was next to arrive and she won on debut at Echuca for Caulfield trainer Lloyd Kennewell and Perth owner Santo Guagliardo.  The Press Statement filly is another Melbourne graduate going through the 2019 Premier Sale for $57,000.

“I’m Speechless kept lifting to kick off her career with a win,” Kennewell said.  “She is a progressive filly and will only continue to improve with race experience.”

Press Statement looked set for a Hong Kong double on Sunday when his 3yo miler Free Foal ranged up to front-runner Shanghai Dragon (All Too Hard) in the Arculli Trophy (1600m).   But Vinery’s old favourite Testa Rossa showed the young guns how it’s done when his gelding Copartner Era won readily after making headway from back in the pack.

Press Statement’s season earnings went through $2million on the weekend and he’s a Top 5 sire on the Australian second-season lists for winners (36) and wins (53). 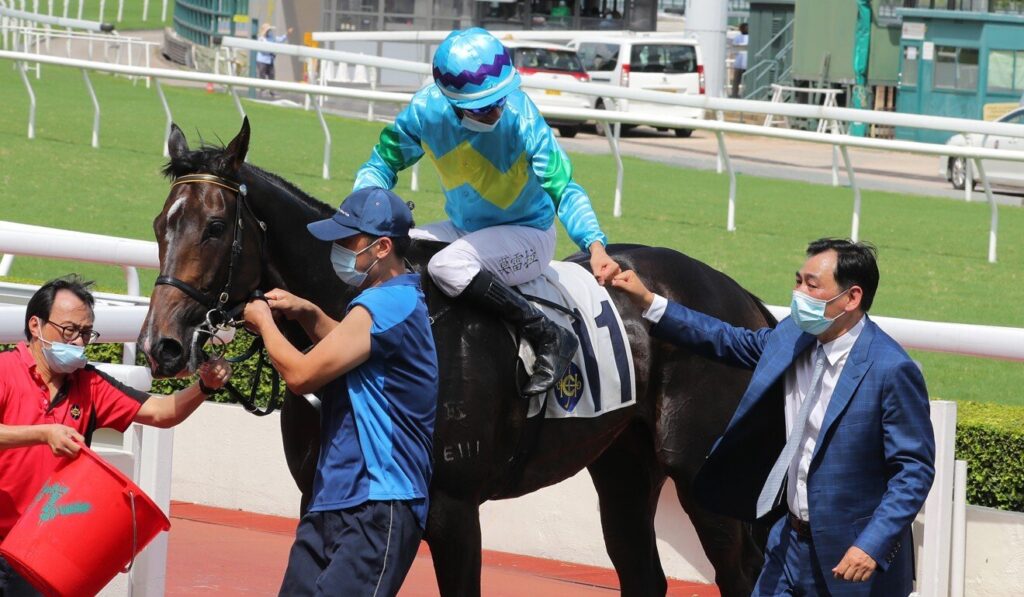