Vinery Stud sire Pluck (USA) has been something of a quiet achiever in Australia despite the fact he finished last season as a Top 10 second-crop sire for winners (30), wins (44) and prizemoney ($1.36 million).

Among them were Group 3 winners Mongolian Wolf (Randwick) & Aspect (Flemington) and there would have been more domestic black-type but for his yearlings catching the eye of international buyers.

Pluck was targeted by Kiwi trainers Murray Baker & Andrew Forsman and they hit the jackpot with Mongolian Wolf, Gasoline and Pluck That.

Mongolian Wolf won the Frank Packer Plate-Gr.3 in April and will be set for the Caulfield Cup-Gr.1 by Darren Weir for his new owners Australian Thoroughbreds.  Gasoline and Pluck That were sold to Hong Kong and both won for trainer Manfred Mann in June.

Pluck’s debut Taree winner Awesome Pluck is also being chased by agents from Hong Kong with offers exceeding $1 million.  “At this stage, he’s not for sale,” trainer Jenny Graham explained.  “But his owner Dale Miller will find it hard to say no if the horse progresses and the offers get bigger.”

Awesome Pluck was a $68,000 buy from Vinery Stud at the 2016 Inglis Classic Sale and he is being aimed at the San Domenico Stakes-Gr.3 at Rosehill on August 26.

Neo’s Classic won again for trainer David Kok at Kranji on Sunday.  Ridden to perfection by Manoel Nunes, he angled around the heels of front-runner Fortune Spirit in the straight for a determined victory in the Flax Stakes (1600m).

“He needed time to mature and is much stronger how,” Kok said.  “We’ve stepped him up over ground and I knew he would be better over a mile.”

Pluck (More Than Ready) won the Breeders’ Cup Juvenile Turf at Churchill Downs and is one of the best value sires in the Hunter Valley at a $9,900 (inc gst) service fee. 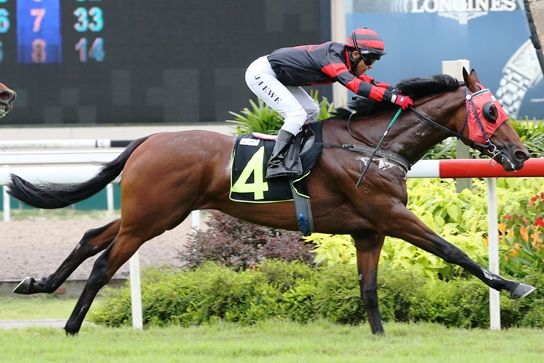