A positive mood prevails around the Swan Valley sale-grounds on the eve of Perth’s Magic Millions Yearling Sale.

Western Australia’s economy has been spared the worst of COVID-19 and vendors are quietly confident local owners and trainers plus online trade will help fill the void left by a restricted on-site buying bench from interstate.

Perth’s training fees are much more affordable compared to those in the east and the prizemoney continues to grow.  The owners of last Saturday’s 2yo winner Spin The Knife (Snippetson) pocketed $82,000 including a bonus thanks to Westspeed Platinum.

Mogumber Park owner Colin Brown arrived with 21 yearlings last weekend and that was an achievement in itself after their preps were disrupted by the bushfires in Bullsbrook.  “It was a stressful time for everyone,” Brown said on Tuesday.  “But Magic Millions were magnificent sheltering all the stock and then relocating them in time for the Yearling Sale.

“It meant a three-day delay but that’s a small price to pay.  TBWA held a Yearling Showcase on Sunday and it was streamed live by Magic Millions. There was a feelgood atmosphere throughout the complex and the interaction between studs and buyers has been buoyant.

“Many of our trainers normally head to the Gold Coast and Sydney Classic so that will have freed up some money.  There are buyers coming across from NSW and our vendors have been contacted by clients from Singapore.”

Rommel (Commands) was off the mark early with his filly Ultimate Command at Ascot in December.  She earned $82,000 and Pixie Chix picked up a $65,000 ladies syndicate bonus in the Magic Millions 2YO Classic.

Sunday’s Showcase gave vendors a platform to preview their leading lots and Magic Millions auctioneers Grant Burns and Chris Farrell provided the commentary ahead of the two sessions on Thursday and Friday.

41  Snippetson – Pearlesque Filly  /  Scenic Lodge
Snippetson stamps his progeny and there’s 17 to choose from this week.  Half-sister to two stakes winners and is off the same farm as Black Heart Bart and Scenic Blast.

48  All American – Real Glow Colt  /  Geisel Park
Impressed us as soon as they took him out of the box at Geisel Park.  Plenty of substance and the All American – Testa Rossa cross has 6 starters for 6 winners.

49  So Secret – Real Hi  Colt  /  Rangeview
Big, strong colt.  From a Group 1 winning family and from a successful stud year in, year out.

94  Maschino – Amity Belle  Filly  /  Alwyn Park
Precocious, running type from a fast family.  By the sire of Fabergino from a Snitzel half-sister to Dendee.  Gives the impression she will train on.

110  Caravaggio – Callista Filly  /  Ruby Racing & Breeding
The first yearlings by Scat Daddy sire Caravaggio were well-received on the Gold Coast.  Hard to knock this filly and she has plenty of upside.

122  Playing God – Countess Of Tiba Colt / WBA
By a hot sire and presents well.  Oozes class and bred to get up and run.  Will appeal to a trainer like Neville Parnham!

137  Demerit – Female Agent Filly  /  Taunton Vale
Lovely walker and you could buy her with your eyes shut.  Impressive individual who marches along.  Three foals by Demerit over this mare have won 18 races and over $1 million.

138  Patronize – Femelle Colt  /  Namerik T’breds
First foal from the mare and looks every inch a racehorse.  Patronize colts average $94k per runner and every dam on the page a winner.

158  Awesome Rock – Hidden Wonder Colt  /  Gold Front
Some of the first Awesome Rocks went east last year. This colt gives the locals a great opportunity to snaffle a good one this week.

Prospective buyers can register for online bidding prior to the sale at: 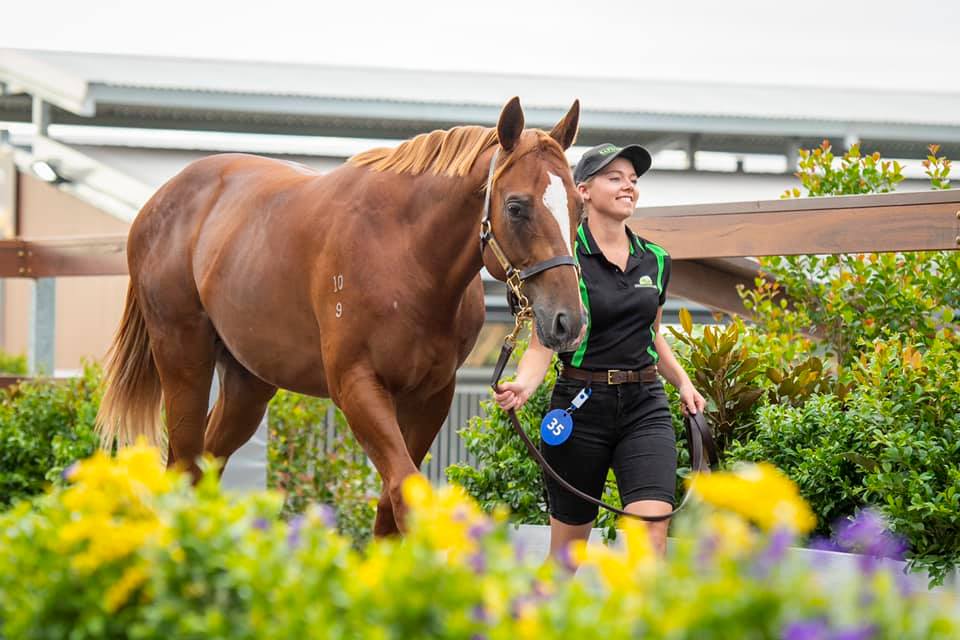